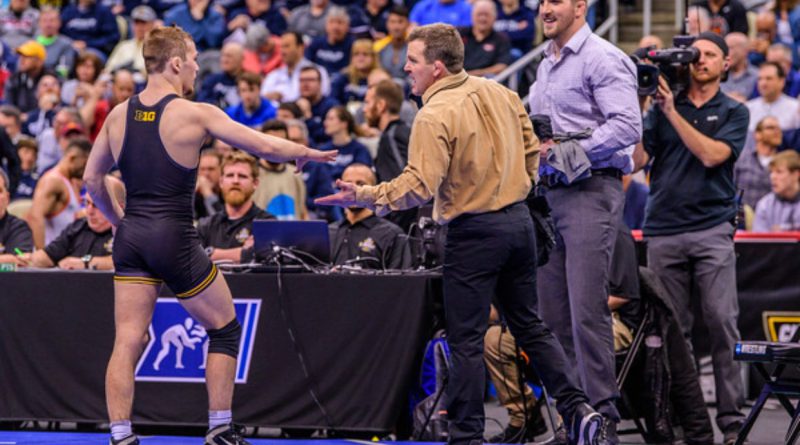 Take a glance at my depth chart below:

*Any Feedback Email Me at dysgould@gmail.com*

I will now be doing a weight by weight preview, and explaining during the weight class how I think that wrestler will help the Hawkeyes come out on top in March.

At 125 we are obviously expecting to see the two time NCAA champ Spencer Lee for the Hawkeyes. Lee is halfway through the journey of becoming a four time national champ, one of the rarest feats in college wrestling. Lee always brings a different game when the time comes to the national tournament. Spencer lost to Sebastian Rivera of Northwestern in the big ten finals in 2019, and he lost to Nathan Tomasello of Ohio State in 2018. In the regular season, Spencer has lost three matches in a combined two years. That is not bad at all, but Spencer just looks so much different and his more dominant at the national tournament. In 2018 Spencer lost to Ronnie Bresser of Oregon State at Midlands. In 2019 Spencer lost to Sebastian Rivera in the Midlands Finals and got pinned by Nick Piccinnini in the dual at Oklahoma State. I look for Spencer to win his third national title in 2020.

With the recent transfer of Gavin Teasdale, we are unsure of who will wrestle 133 and 141. I, however, am expecting Desanto to stay at 133 and Teasdale or Murin to be at 141. In that case, Desanto is coming off of a 5th place finish at the National Tournament. His record last year was 23-6. Desanto’s non-stop pace is one of the best in college wrestling. The only All Americans from last year that graduate are John Erneste and Ethan Lizak, but national champ, Seth Gross will be back, this time representing the Wisconsin Badgers.

At this weight I am expecting to see Max Murin or Gavin Teasdale. There is a possibility that Teasdale redshirts in his first year as a Hawkeye. He still has four years of eligibility left as last year counted as a medical year. If he would redshirt, that would give him a year to get back into the groove of wrestling and Pat Lugo at 149 will have graduated by next year, so that would give the coaching staff a little extra wiggle room with Max and Gavin. Don’t forget that Lee and Desanto still have redshirts to use. They could play around with their redshirts to fit Murin and Teasdale in the lineup within the next couple of years.

If we see Max Murin at this weight, Iowa should not have to worry about their success. He looked very good at the National Tournament, coming in as the 22nd seed and finishing as a R12’er. The Pennsylvania native had a record of 17-10 last year.

At 149 I am expecting to see the returning All American, Pat Lugo. He is coming off an eighth-place finish and a record of 23-10. Lugo matched his seed at Big Tens and placed third, earning him the tenth seed at the National Tournament. The Edinboro transfer started out the season last year losing to a couple of unranked opponents but turned it up after a fourth-place finish at Midlands. He gave the eventual champ the best match of his year only losing to Anthony Ashnault 3-1 in overtime at Carver-Hawkeye Arena. He closed out his dual season winning his last seven dual matches, and a win over the then #6 Kaden Gfeller.

At this weight we are most likely going to see, the returning All American, Kaleb Young. Young is the second highest returning all American placing 5th as Hayden Hidlay is a returning 4th place finisher. The Punxsutawney native is coming off of a 24-7 record. One of those loses was a 6-2 loss to Ryan Deakin in the finals of Midlands championships. Young was able to avenge that loss twice though in Pittsburgh. The Hawkeye 157 pounder was able to beat Deakin in the quarterfinals by the score of 7-5 in overtime. He was able to beat him again in the fifth place bout the same score again in overtime. (Deakin quarterfinals match) I look for Young to have a good year and I think he will be standing high on the podium in March.

At 165 we are expecting, the two time All American, Alex Marinelli. The bull is coming off a Big Ten championship and a record of 27-2. Marinelli had Evan Wick’s number this year as he beat him all three times they wrestled, in 2018 Marinelli was majored by Wick at the National Tournament. Two of the matches between the two were decided by one point, the other was decided in overtime. See the overtime match here. The Bull was able to beat Vincenzo Joseph in the Big Ten finals by a dominating score of 9-3. I think that Marinelli will find a way to get the job done in Minneapolis and get higher on the podium in 2020.

At 174 we will, can you believe it, another returning All American in Michael Kemerer. The Pennsylvania native was out all of last year because of an injury. In 2018 Kemerer was seeded sixth going into the national tournament but ended up placing fourth. He also had a record of 27-3 in 2018. At this weight the top two returning All Americans, National champ Zahid Valencia and Runner Up Mark Hall both qualify to use an Olympic redshirt. If they both take an Olympic redshirt that would leave Kemdawg and Myles Amine as the top two preseason. My preseason prediction is if Hall and Valencia don’t take Olympic redshirts.

At 184 I expect to see Cash Wilcke, the returning R12er. He placed fifth at Big Ten’s and he had a season record of 23-8. He had a big win over then #3 Taylor Venz in the dual at Nebraska. Wilcke can really show some signs of a great wrestler and then sometimes he loses to a couple of guys he shouldn’t lose to. If he can put it all together and put a lot of points on the board in 2020. We could see Wilcke have a breakout year see him get on the podium for the first time and help the Hawkeyes in the team race.

At 197 we will most likely see, returning All American, Jacob Warner. The sophomore placed eighth in Pittsburgh and third at Big Tens. His record on the season was 22-6. Warner was upset in the round of 16 by Thomas Lane of Cal Poly. In Warner’s Big Ten dual debut he was able to come out on top of Willie Miklus 5-4 in the dual against Iowa State. Again if Warner can put it all together and put points on the board, he could be standing high on the podium in Minneapolis and could be a huge help in the team race.

At heavyweight I expect to see, redshirt freshman, Anthony Cassioppi. His record last year in open tournaments was 20-2, including a 4-2 record at Midlands. In high school Cassioppi was a two time Illinois folkstyle state champ and didn’t give up a single point in his Junior and Senior year. He was a Junior triple crown winner in 2017 and 2018 (Folkstyle, Freestyle, and Greco national champ). He also won the Junior Pan Am Games in Peru in 2017. As you can see, Anthony Cassioppi has proved himself on the high school circuit. I am excited to watch him wrestle for the Hawkeyes and see if his success that he had in high school carries over to college.

This year’s team race is going to be very close and very exciting to watch. I am excited to see how it all plays out in Minneapolis. I can’t wait to see how my Hawkeyes do in the team race as well.