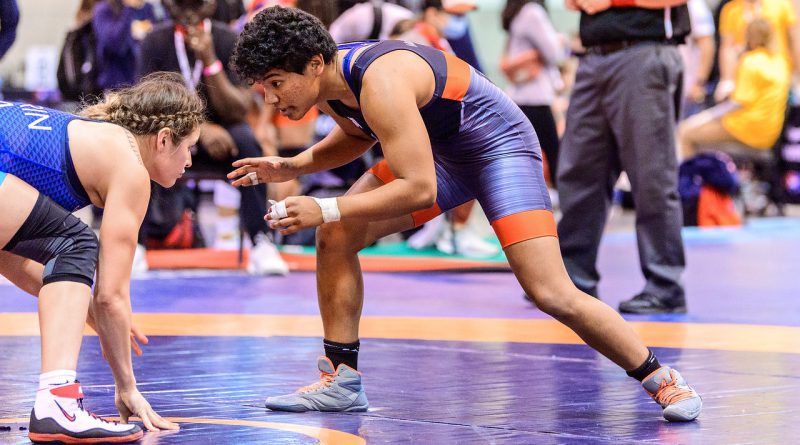 Last weekend’s Junior National tournament in Nebraska certainly did not disappoint; the women’s divisions were loaded with extremely high-level talent. Here’s a breakdown of all the action in Omaha:

Check out the brackets here on FloArena.

The 50 kg bracket has one word to describe it: “wow.” Number one seed, Samara Chavez of Texas Mat Club dominated the opening rounds with a pair of tech-falls. Chavez lost by pin in the quarterfinals to Washington’s Salyna Shotwell, a match that was by far my favorite of the whole event. Who doesn’t love non-stop action, constant scoring, and an upset? I know I do! Shortly after, Shotwell then went on to wrestle Ava Bayless, star Wyoming Seminary junior. Trailing the match 4-3 Shotwell threw Bayless to her back and secured the pin, advancing to the finals. The other side of the bracket had one seed Emily Shilson tech-falling all of her opponents, punching her ticket to the finals. The 2018 Cadet World Champ didn’t have such a smooth time in the finals, however, as the red-hot Shotwell gave the seasoned Shilson a run for her money. Shilson trailed 2-0 at the end of the first period but later earned a takedown to take both the lead and the title at fifty kilograms.

Let me begin by saying the 53 kg bracket was killer; these ladies were definitely out for blood! The roster was filled with depth such as multiple All-Americans and several national champs. Without a doubt, the match that stuck out to me the most was between 2019 US Open Champion, Tiare Ikei, and 2019 Dave Shultz Champion, Alisha Howk. Ikei won this semifinal match with a smooth series of go-behinds to outscore Howk 9-1. Ikei moved onto the finals where she faced off Mckendree’s Felicity Taylor, winning by 12-1 technical fall. Menlo’s Alleida Martinez suffered a loss to Marissa Gallegos of Colorado Mesa University early in the day but wrestled well on the backside to earn a third-place finish over Gallegos, the rematch going in favor of Martinez 3-2. Personally, I do not think any other bracket in the whole tournament had this much depth!

Despite the level of talent at 55 kg, only one girl could walk away with the title. Number one seed, Ngao Whitehorn, lost a heartbreaker in the first round to Isabella Amaro of All-Phase Wrestling Club. Whitehorn battled through the consolation bracket to earn sixth place. Amaro, on the other hand, moved onto wrestle a very dominant match against East Stroudsburg University freshman, Grace Pauls, earning a spot in the semifinals against Hawaii’s Nanea Estrella. Although Estrella pinned Amaro in the semifinals, Amaro bounced back well and went onto place third in this high-level bracket. Despite her age, the junior Amaro has clearly proved she is a force to be reckoned with! Pennsylvania native, Vayle Baker, wrestled a solid tournament to secure her spot in the finals where she lost to Estrella by technical fall.

After putting herself on the map with a fall over World silver medalist Alli Ragan at the 2020 Senior Nationals, Xochitl Mota-Pettis (XMP) was looking to make a clean sweep of the competition in Omaha. Mckendree’s Cameron Guerin, a seasoned competitor herself, met XMP in the finals, dominating the match 8-3. Emily Se of Lion Wrestling Club and Mia Macaluso put on a great show for third place. These girls fired back and forth, but the match ended when Se took Macaluso to her back to earn the fall. These four girls are certainly going to take the senior level by storm!

Fifty-nine kilograms was THE bracket to watch. Fargo Champion, Jerzie Estrada, made her comeback a few weights lower than we are used to seeing her compete. Her accolades didn’t scare Paige Recipio of Warrior Wrestling Club, who defeated Estrada 14-3, bumping her into the consolation rounds where Estrada fell short to Jordan Suarez of Texas Panhandle Wrestling Club. I won’t lie, Suarez really impressed me. This girl lost her first match to the eventual champion, Gracie Figueroa, but had a phenomenal performance in the wrestlebacks. Suarez was on fire with a 4-0 win against Super 32 Finalist, Devon Patton, and 8-0 win over previously ranked number one in the country, Amor Tuttle, a fall over King University’s Phoenix Dubose, and, to cap it off, a dominant 5-0 win against Tiera Jimerson to earn third place. Suarez is certainly someone to watch in the future! Plowing through with three technical falls to make the finals, Micheala Beck was clearly not messing around. Beck faced Figueroa in the finals and lost 4-2, but wrestled her heart out till the last whistle.

If you know wrestling, you know Macey Kilty and Kylie Welker. Both girls are Wisconsin natives and are quite familiar with one another. Kilty was the face of high school girl’s wrestling before graduating, and now Welker is rightfully stepping into her shoes. Welker, along with Kilty, has been on multiple age level national teams, earning a Cadet World Bronze medal in 2019 . Welker scored first in the final bout, but it wasn’t too long until Kilty took an 8-2 lead and claimed her stop sign. Fresh off her championship performance at the 2020 Defense Soap Super 32 Challenge, Chloe Ogden of the esteemed Lake Highland Prep program teched her way to third place over Wyoming Seminary’s Kendall Bostleman. I suggest you keep this girl on your radar; she’s in it for the long run!

Early in the day Katerina Lange upset Bri Csontos, earned a pair of tech falls in through the semis and punched her ticket to the finals. On the other side of the bracket, Marisol Nugent proved her competence in Omaha. A quick side note, Nugent is taking an unconventional approach to pursuing collegiate women’s wrestling as Currently, she is a freshman at Lehigh University, wrestling for the Lehigh Valley Wrestling Club. With two tech falls Nugent made it to the semifinals where she faced Victorya Torres of King University. The last time these two wrestled Torres came out on top at Super 32 in 2019. Nugent successfully avenged her loss to Torres last weekend with a 6-5 decision. Torres went on to take fourth after losing to Bri Csontos by fall. Nugent defeated Lange 14-3, taking a stop sign back to Bethlehem!

Unfortunately, this weight did not have as good of a showing as the others. The bracket was converted into a round-robin, where Alexis Gomez showcased a fantastic performance having first-period technical falls all throughout the whole tournament. She went out, did her thing, and looked solid while doing so. I am excited to see what Gomez has in store for us in the future.

It was really no surprise to me when Wyoming Seminary’s junior, Kennedy Blades, took home the title at 72 kg. Blades, simply put, is another breed; just recently she threw MyHouse sponsored athlete, Hannah Gladden, to her back and pinned her. Blades stormed through this division without giving up a single point. Sophomore Joye Levendusky of Mckendree also didn’t give up a point heading into the finals until she wrestled Blades. Levendusky did a great job defending Blades’ high-volume offense, but couldn’t get in on any of her own, ultimately leading to yet another national title for the still-young Blades. Blades’ chain wrestling is close to perfection and she’s only a high school junior! I don’t think the world is ready for her progression as time goes on.

Seventy-six kilograms had Colorado Mesa freshman Tristan Kelly’s name all over it. Just like Blades, Kelly also went the whole tournament without getting a point scored on her. In the finals, she earned a tech fall over Yelena Makoyed with two takedowns and a beautiful leg lace. Kelly wrestled an incredible tournament, and if I were her I’d be very satisfied with my performance. Watch out, cause Kelly’s not done yet!