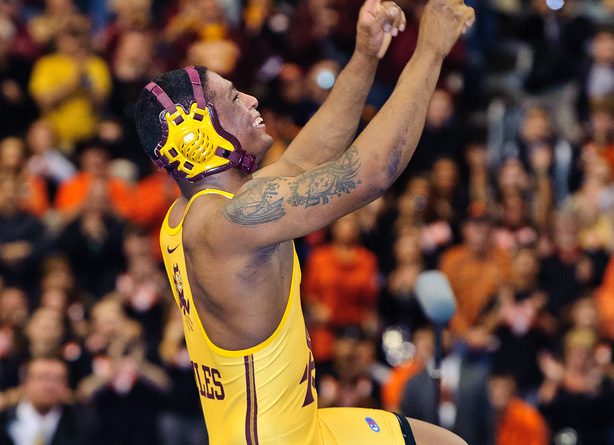 All of us will come up against adversity in our lifetime; odds stacked so high against you that it will seem nearly insurmountable. But “don’t let it be your excuse,” says NCAA Champion Anthony Robles. “Don’t let your opposition be the reason you fall short of your goals. Acknowledge the hardship and attack it with purpose to become unstoppable.”

My name is Abby Swisher, I’m fourteen years old, and although I’ve never wrestled, I come from one of the best wrestling locations in the world and a die-hard wrestling family. After recommending Anthony Roble’s autobiography to me, my older brother Jude (the one and only) suggested I give a short review.

Unstoppable: From Underdog to Undefeated: How I Became a Champion, an autobiography by wrestler Anthony Robles, details his journey overcoming obstacles and becoming NCAA champion. The story takes us through his early life, family situation, education, and wrestling struggles and achievements. We learn about the people who guided him, strategies that helped him thrive, and his thought process while considering a challenge. Robles, an Arizona native, is an NCAA champion and 3x All American for Arizona State. In addition, he won the Outstanding Wrestler Award of the 2011 NCAA Wrestling Tournament which had wrestlers such as 4x NCAA Champion Kyle Dake, 2x NCAA Champion Jordan Burroughs, and 2x Hodge Trophy winner David Taylor competing as well.

With a combination of excellent coaching and skillful tactics, a brutal style perfectly crafted for Robles took form, paving for him the avenue to success at the highest level of collegiate wrestling. Having only one leg added an extra hurdle to the already difficult and demanding path to wrestling success, yet Anthony never let it stop him. Whatever his Sundevils did, he did too. He worked manically to achieve his goal of becoming champion. He had his share of losses, frustrations, hard days, and heavy decisions to make, yet instead of letting these setbacks break him down, Robles used them to fuel his determination to the point where people began speculating that his loss of a leg was an unfair advantage.

A prominent theme throughout the book is conquering adversity. Again and again, Robles rose up against obstructions in his training, family life, and matches that could easily have knocked him down for good. Even when an unstable home life reared its ugly head in the midst of the wrestling season, Robles persevered. He is an incredible embodiment of strength, determination, and courage, truly earning the title unstoppable.

In conclusion, this demonstrated that Anthony Robles is the perfect example of determination, perseverance, and character. True, there are copious amounts of wrestling and high-level descriptions of matches and techniques, but it also contains so much more: a chronicle of a young man’s pursuit of greatness. It was a fascinating read and I would recommend it to wrestling fans and non-fans alike.