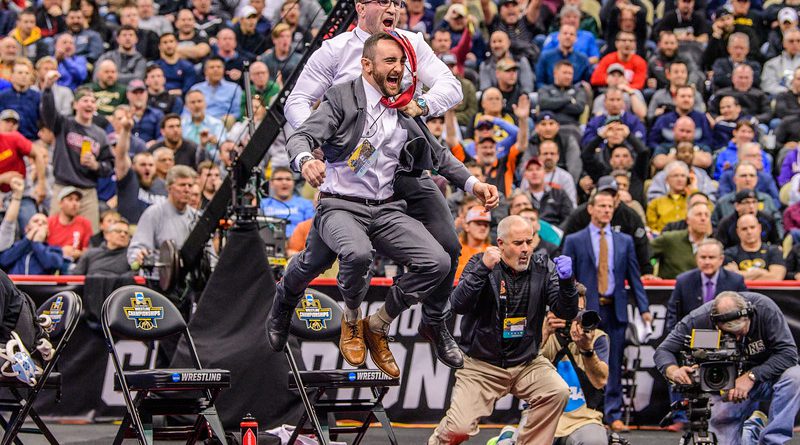 This Saturday, November 23, 2019, the Cornell Bears will host the NC State Wolfpack at 1 pm EST. This dual has so many interesting storylines from coach Koll’s decision to Olympic Redshirt 3 of his top wrestlers, to Darmstadt’s return against a junior world medalist in Trent Hidlay, to Colton Yapoujian’s debut against the #1 wrestler in the country. Take a look at the projected lineups below.

Following Vito Arujau’s decision to take an Olympic redshirt, Cornell slid in Dom LaJoie (4-1 on the season). Pat Popolizio brought in a high level recruit in Camacho, who is a big question for the Wolfpack fans. Camacho is 3-1 against common opponents while LaJoie is 2-2 (LaJoie lost to Camacho’s backup 125, Charlie Lenox). This matchup definitely favors Camacho, who many predict to be an All-American this year, but LaJoie’s ability to find a pin in his matchups gives him a fighting chance. Despite that fact, I’m going to take Camacho to take this match in a decision, giving the Wolfpack a 3-0 lead over Cornell.

This match, again, is fairly one-sided with U23 world team member, Chas Tucker of Cornell, who is currently ranked #6 vs #23, Jarrett Trombley, of NC State. Chas Tucker sat out for Cornell’s first event at Jonathan Kaloust Bearcat Open, so this will be his season debut. Tucker is heavily favored in this match, and naturally he will be my pick. However, Tucker wrestles extremely tight, and Trombley is a solid wrestler, so I am predicting a tight match, tying the dual at 3.

As I mentioned, the Coach Koll is valuing the Olympic year, and Olympic redshirting three of his top wrestlers including 2x NCAA champion, Yianni Diakomihalis. This redshirt slides Noah Baughman into the starting lineup for the Big Red. On the side of NC State is NCAA  All-American, Tariq Wilson, who took 3rd place at the 2018 NCAA tournament at 133. Tariq is a freak of nature whose neutral offense is extremely vast. Just like the previous two matches, this match is heavily leaning one way. Naturally, my pick to take this match is Tariq Wilson by major, giving the Wolfpack a 7-3 lead.

This is one of the only matches that we have seen before. Hunter Richard beat AJ Leitten 6-3 at the 2018 National Collegiate Open. Since then, Leitten has been on somewhat of a tear. He is 9-3 on the season and earned bonus points in ⅓ of his matches. However, Richard has not been dormant since their last meeting. He won his last tournament this season, earning him a 4-0 record this year. Richard is the slight favorite in this match and a win from him would put the team score at 7-6 in favor of the Wolfpack.

Hayden Hidlay, a 2x NCAA All-American for the Wolfpack, will take on Cornell’s blue-chip freshman from Colorado, Colton Yapoujian. This will be a HUGE first test for Yapoujian in the Newman Arena. Hayden Hidlay is the favorite to win this year’s NCAA tournament after his impressive run in the last two years, making the finals once and almost taking out Jason Nolf in the other. NC State will look to the older Hidlay brother for bonus points for the dual. Consequently, Hayden will be my pick for 4 team points making the score 11-6 for the Wolfpack.

165 brings in the first of the Bullard brothers for the Wolfpack to the mat. Thomas Bullard is a 2x NCAA qualifier for NC State. He is heavily favored over Santoro. However, don’t count Santoro totally out of this match. Rob Koll has the uncanny ability to develop his wrestlers for big matchups. Regardless, I will still pick Bullard to win this match by decision, thus extending the Wolfpack’s lead to 14-6.

Thomas Bullard’s brother, Daniel, has an extremely large test in Cornell senior, Brandon Womack. Womack is 12-8 against common opponents while Bullard is 9-13. The Cornell senior is a 3x NCAA qualifier and is currently ranked #11 in the country. As you can see, Womack is clearly the favorite in this match, but Bullard has an extremely high ceiling and has a fighting chance in this match. Nonetheless, my pick is still Womack by decision, hence closing the gap of the team score to 14-9 in favor of the Wolfpack.

This is the marquee matchup of the dual. Junior world medalist, Trent “Hoagie” Hidlay, vs NCAA All-American, Ben Darmstadt. Strength vs length. All eyes in the Newman Arena will be focused on this match. The NC State freshman has two top 3 matchups on November 23 alone! His first is against #3 Ben Darmstadt. Hidlay’s underhook game is incredible, even on the college level. (The second is in NC State’s dual vs Binghamton later in the day.) Surprisingly, this freshman is able to muscle his opponents who have many years on him. Despite the strength of this phenom, I am going to take the Cornell veteran in this matchup. This further closes the gap of the team score to 14-12.

The team score will come down to these last two matches. Despite the fact that Cornell and North Carolina State don’t specialize in their heavier weights, this dual will come down to 197 and 285 (if they start at 125, which I hope they don’t). NC State will likely roll out sophomore, Tyrie Houghton while Cornell has Jonathan Leow. This match will slightly favor Leow, yet it will be a practical coin flip. They have never had a head-to-head match and no common opponents, so there is very little information between these two. My pick is Leow by decision, giving Cornell the lead 15-14.

The dual will most likely come down to this match. Brendan Furman of Cornell vs Deonte Wilson of NC State. This is Furman’s first year as a starter for the Big Red while Wilson started last year as a true freshman. This match, just like 197, is practically a coin flip. Both are 1-0 against common opponents with similar points scored. I’m going to give the “Home Mat Advantage” to Furman in his first ever dual for the Big Red, and pick him for this match and Cornell for their first dual of the season.

All this action takes place on ESPN+ at 1pm EST. Make sure to tune in to witness these great matchups!!