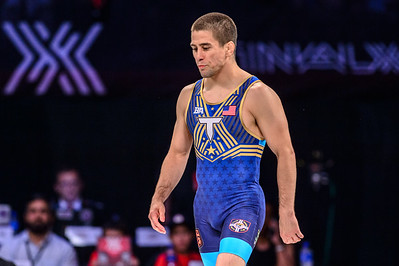 Hi, my name is Dysen Gould, I’m from Punxsutawney, PA, and I am 13 years old. I met Sam through a National Dual Event. Then, I started talking to him on Twitter. I will be writing articles for HMA in the future.

Overall, Final X was a great couple of events, both in Lincoln and at Rutgers, but my first article’s topic will be focused on the match notes of Final X: Lincoln. My picks were off by quite a bit. I had Colon, Gilman, Deakin winning, but it did not end up that way.

This series was fun to watch. Both wrestlers were very open and scored lots of points. Tyler Graff really showed some mental toughness and perseverance to come back and win two matches after losing match one to Colon.

In Match one, both wrestlers came out firing with Colon leading 6-4 at the break. Early in the first, Graff scored a takedown off a quick leg-attack. After that, Graff got in on a half shot, but Colon was able to score exposure points by pancaking Graff to the mat. Then, Colon was able to score off of an outstanding head pinch to take the lead, 4-2. Once Colon spun behind a flattened out Graff, he was able to score using his renown gut wrench. Colon’s world class gut wrench was the deciding factor in this match which ended with a score of 6-4 as the second period produced no more points for either wrestler.

Match two was all Tyler Graff. Off the whistle, Graff wrestled at a high pace, forcing Colon into a defensive posture and resulting in a shot clock violation for a point for Graff with about one minute left in the first. Forty seconds later, Graff got in on a high-crotch and scored a takedown with ease. Joe Colon’s corner decided to throw the challenge brick, but lost which gave Graff a point for a failed challenge. Graff lead 4-0 at the break. With fifty seconds left in the second, Graff doubled Colon to his back, but Colon elevated Graff over to his back to get exposure points. This exchange rewarded Graff four points and Colon two. Graff then received one point for a reversal which lead to the conclusion of the match, ending with the score 9-2 in Graff’s favor.

Match three took Tyler Graff all of 1:34 to tech fall Joe Colon. Thirty five seconds into the match, Graff took a shot, but Colon exposed him for two points. With about two minutes left in the first period, Graff scored a takedown. Tyler Graff then locked up a leg lace and turned Joe Colon five times to tech fall him 12-2. The NJRTC gained their second World Team member in Tyler Graff.

Kyle Snyder looked very good in this series. He showed that he can also score from the top position where he racked up six points which was surprising because we usually see him scoring on his feet with ankle picks, low singles, and go behinds.

The first points were put on the board in match one only twenty seconds in when Kyle Snyder scored on a low single where he was forced into transitioning to a high-crotch to get a takedown. There were a couple shots taken by each competitor, but the next person to score was Kyle Snyder. Snyder shot to Gadson’s right leg with about 30 seconds left in the first to get another takedown. Those were the only points scored in match one, giving Snyder the 4-0 win.

In match two, Kyle Snyder wasted no time scoring on a go-behind three seconds into the match. Snyder then proceeded to lock up a trap arm gut and turn Gadson twice to take a 6-0 lead. Kyle Snyder was then awarded one point for a step out, but Kyven Gadson’s corner threw the challenge brick and won the challenge. Gadson was the one who received the step out point, and Kyle Snyder lead the match 6-1. Ten seconds later, Gadson took a half shot and was pancaked to his back, which gave Snyder four points to lead the match 10-1. Snyder then locked up a gut wrench and turned Gadson to get the tech 11-1. Kyle Snyder will be representing the United States in Kazakhstan at 97kg.

In this series James Green showed that he is not afraid to get after it and put points on the board. In match one, James Green came out gunslinging for his home crowd at the Bob Devaney Sports Center. It took him all of 16 seconds to tech fall Ryan Deakin 10-0. Eight seconds into the match, Green was right in on a sweep and scored a takedown. He then locked up a leg lace and turned Deakin four times to get the tech fall.

Match two was a lot closer, but James Green came out on top, only winning by two points, 4-2. The first point was put on the board with a minute left in the first with Ryan Deakin being put on the shot clock and not scoring giving James Green the lead,1-0. Forty seconds later, Green and Deakin got into a flurry, and Green ended up shooting Deakin out of bounds for one point. The score at the break was 2-0, Green. The next points were put on the board a minute and fifty seconds into the second when Ryan Deakin was put on the shot clock, but he was able to score a takedown with two seconds left on the shot clock. He then took the lead 2-2 on criteria. Deakin scored when Green shot in, and Deakin did a great job of circling around and capturing the near leg to get the takedown. Thirty seconds later, Green was able to score a takedown by getting into an underhook and snatching the near leg. Green led the match 4-2, and those were the final scores of the match. James Green will be representing the United States in Kazakhstan at 70kg.