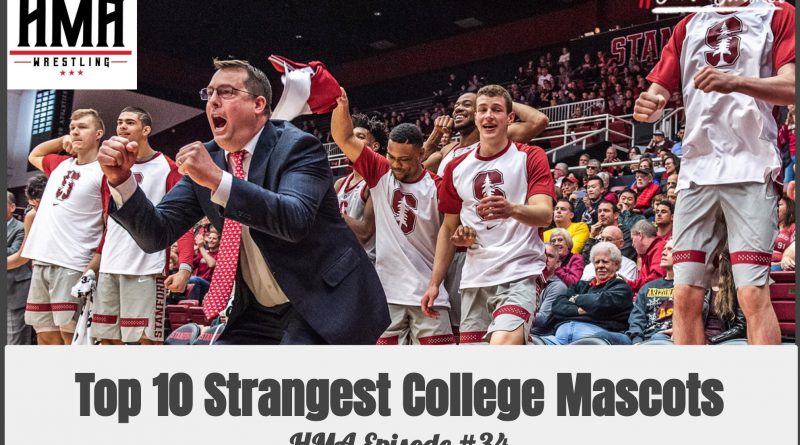 While competing at The Defense Soap Super 32 tournament in Myrtle Beach two weekends ago, I happened to pass a man wearing a Campbell University sweatshirt. Walking over to my friend Erik Gibson I thought to myself, “The mascot of Campbell University is really the Camels? That’s a terrible mascot.”. After a quick conversation with my cohost Sam Herring we decided that a comprehensive list of the worst NCAA college mascots was in order. So here it is: the HMA Official Top 10 Strangest NCAA D1 Mascots, please enjoy.

#10: The University of Maryland Terrapins “Maryland blew it.”

And starting off the list at number ten we have the University of Maryland Terrapins. For those who aren’t up-to-date on their obscure reptiles, a terrapin is a turtle-like marsh-dwelling creature that resides in the coastal swamps of Maryland. Aside from the obvious reasons that a terrapin is A) not intimidating, and B) relatively unknown by the general public, Maryland had an EXCELLENT opportunity for a fantastic mascot. The state animal of Maryland is the Chesapeake Blue Crab, and, speaking as someone who has been pinched by an angry crab, it would certainly suffice for an intimidating mascot.

Much to the chagrin of our good friend Erik Gibson, Cornell University’s Big Red slides into our number nine spot. Yes, we know that their implied mascot is supposedly a bear, but that begs the question: why in the world didn’t they call themselves the Cornell University Bears? They sure don’t have any issue with using the grizzly on t-shirts and graphics, but for whatever reason, Cornell couldn’t bring themselves to rebrand to the Bears. An interesting fact about the term “Big Red” is that it’s comprised of two adjectives, which makes no grammatical sense.

#8: The University of Nebraska-Lincoln Corn Huskers “Nebraska- the Midwest in general- loves their corn.”

Good gravy. As someone who has spent a great deal of time husking corn, I can definitively say that nobody enjoys this tasks. Why someone would think that “Corn Husker” is a good mascot is beyond me. If the corn theme is required, then at least go with the corn weevil, which is slightly more threatening than someone whose occupation involves shucking cobs.

Sam Herring takes particular issue with number seven on our list. He has no idea why a boilermaker, of all things, would suffice for an intimidating mascot. I think, and Sam agrees, that occupations in general have no business being the mascot of a sports team, especially when animals such as the rattlesnake exist. That would be a cool mascot, the Purdue Rattlesnakes. Luckily for the Boilermakers, the HMA crew loves their singlets and their train-themed stuff is sick too.

#6: Ohio State University Buckeyes “Sure it’s poisonous, but like, it’s just going to sit there and rot.”

Although we recognize that the buckeye is native to Ohio, Sam and I are firm believers that a college mascot should never involve something that is immobile. To my understanding, a buckeye is a seed and aside from a hard exterior probably isn’t going to hurt you, unless you’re dumb enough to eat it. C’mon Ohio, let’s get an slightly more intimidating mascot. Brutus the Buckeye is pretty funny though!

Hold your horses there Sam Herring, because coming in at number five on our list is the Presbyterian College Blue Hose. Any immature implications aside, the Blue Hose is a truly awful name, as nobody has any idea what a Blue Hose is. Our best guess is a form of a garden hose, and why anyone would want that as a mascot is beyond me. Somebody should let them know.

#4: University of Oklahoma Sooners “It totally lost me I had to Google it.”

Our quote for the number four spot aptly describes our reaction to the University of Oklahoma Sooners, whose intended mascot is about as clear as a bowl of pea soup. A quick Google search reveals that a Sooner is, in fact, the term given to domestic settlers rushing Oklahoma’s unassigned lands before the U.S. Government officially permitted entry in 1889. Now, when I signed up to be an Oklahoma fan, I didn’t sign up for a history lesson. I shouldn’t have to open my AP US History textbook to find out what a college mascot is! But, I can probably imagine that the original Sooners were pretty tough people, so that is a bonus for Oklahoma.

Luckily for the third spot on our official list, they have the word “mat” in their name, but that won’t be enough because the Franklin and Marshall Diplomats is a objectively disgraceful mascot. Good for F&M for seeking alternative options and breaking the conventional mold, but nothing about their mascot inspires fight in a fan. Let’s go Diplomats!

Honorable Mentions (because of course we had to do honorable mentions!):

Malvern Prep Friars – a friar is a member of a religous group within the Catholic Church, similar to a monk. Even though it’s a highschool team, it’s so bad we had to mention it.
University of North Carolina Tar Heels – Once again, a history lesson was required to find out what a “Tar Heel” was. Not good for UNC, but I’m a huge fan of the city of Chapel Hill.
University of Illinois Fighting Illini – Sam Herring didn’t even have a reason for this one. He probably just hates Illinois. Messed up.
Virginia Tech Hokies – Another obscure animal, the hokie is actually similar to a turkey, which is, needless to say, a silly mascot.

#2: University of Pennsylvania Quakers “Why didn’t you do the honorable mentions after number two?”

Let it forever be said that Jude Swisher despises extracurricular research, especially if it involves the mascot of a university. Quick history lesson: the Quakers were a religious sect of England in the early 1600s who escaped the persecution of the Anglican Church. Another fact about the Quakers is that they were known, PACIFISTS. They never would have even approved of wrestling. This is among the worst mascots in sports, let alone D1 athletics.

#1: Stanford University Cardinal Trees “Why is there a tree on my shirt?”

And ladies and gentlemen, the number one spot for the HMA Official Top 10 Strangest NCAA D1 Mascots are the Stanford University Trees. The redwood tree, native to California, was selected for Stanford’s mascot because nothing gets my adrenaline pumping like an 800-year-old tree. Guys, it can’t even move. It’s older than anything alive today. There is no feasible reason for the Red Tree to be a mascot for anything except an arbor society! Better luck next time, smarty pants.

And there you have it; HMA’s Official Top 10 Strangest NCAA D1 Mascots full comprehensive list! Quick disclaimer, we are huge fans of all of these programs and have no ill-intent. Thank you to all these wrestling programs for supporting our fantastic sport, and best of luck to the athletes and coaches in the coming season! If you haven’t already, please listen to our episode were we determine the list here:

And please, if you enjoy our content, be sure to pick up our HMA Merchandise here: www.hmawrestling.com/shop, it’s the easiest way to support us and our show.