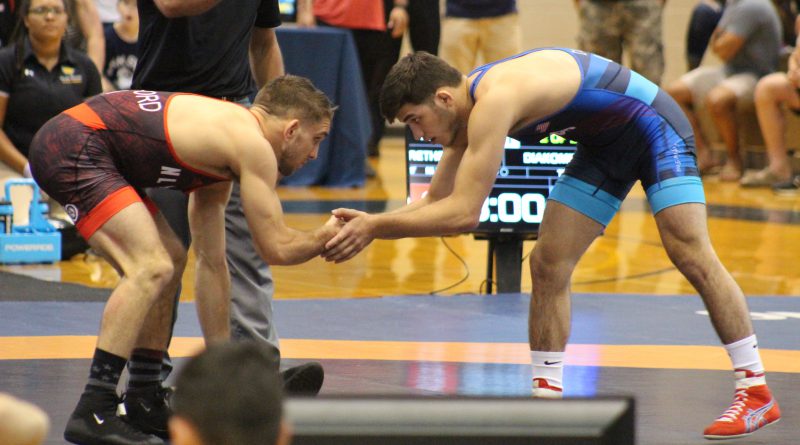 A legendary back and forth. The Marts Gymnasium at Wilkes-Barre was jam-packed full of deafening fans and cheering spectators, all come to watch the climactic conclusion to the Zain Retherford/Yianni Diakomahalis best out of three matches. The energetic fans were packed like sardines, and the mix between Zain fans and Yianni fans was probably 70% Zain and 30% Yianni. One thing is for sure, however, that crowd was filled with 100% wrestling fans.

The match opened with fierce handfighing and a strong pace. Faking in and out Retherford moved Yianni, setting him up for a crisp low double-leg shot. Executed perfectly, Zain’s shot knocked Diakomaholis straight onto his rear, but the takedown was far from given up. While he was falling Yianni reached over the top and locked his hands around Zain’s waist. Amidst the hundreds of cries of “Two!” Yianni held firm and refused to buckle. He began to transition the pressure off of himself and to get his legs back. The referee, deciding that the sequence had already taken too long, restarted the two wrestlers. The NLWC coaches threw the brick on behalf of Zain, but after a brief discourse with the table judges, the referee denied the challenge. The first point of the match goes to Yianni for the failed challenge of Zain’s corner.

All of a sudden the match had more depth to it. Now on the offensive, Retherford began moving Yianni with more zeal than before. When Zain reached up with his right hand Yianni timed it and shot in with a slick single leg. Zain countered by crotch locking and exposing him for two points. Yianni recovered, but the damage had been done. Zain lead with two points going into the break.

The second period was filled with several powerful exchanges, but none were beneficial to either wrestler as they ended in stalemates each time. The crowd was growing more and more heated as the clock ticked down to closer to zero. Zain in the lead, Yianni so close behind. Time and time again it looked all but a takedown for Diakomaholis, but Zain held on with a gritty resolve. Yianni has a strange ability to score in times of need.

Several times throughout this 2019 Men’s Freestyle season Diakomaholis was down by one or two points with a minute to go, but somehow found a way to end up on top. As time passed under a minute, it seemed almost forgone that Yianni would score. Every time either one of them got in on a leg attack, Yianni was a hair away from stealing the match. That’s why when the clock hit zero the Penn State crowd exploded with cheering and clapping, not only for their wrestler but for what he overcame. He overcame the toughest competition in the country. He overcame injury. He overcame the drama from the Final X: Rutgers series and the arbitration. Yes, Yianni Diakomaholis is one of the greatest wrestlers of this era, and he’s only getting started. But this match belongs to Zain Rutherford, the 2019 Men’s Freestyle Senior Level representative.