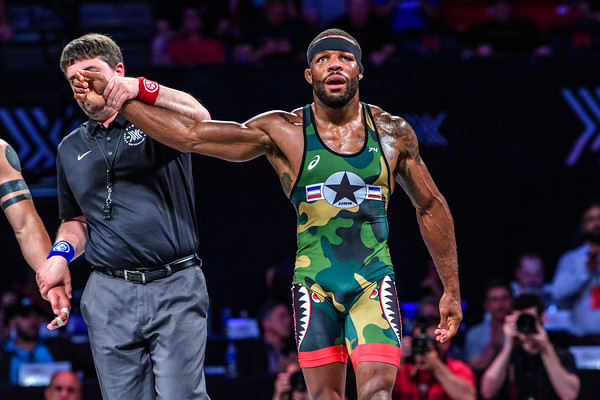 This is part two of my Final X Lincoln recap which consists of 57kg and 74kg. In my opinion, these two series were the most exciting and interesting matches to watch. In both matches, we saw a lot of points put on the board and very intense hand fights.

In my opinion, even as a die-hard Iowa fan, Gilman looked sloppy in this series against Daton Fix. In my opinion, one of the biggest errors with Gilman’s wrestling was evident on Saturday night. Instead of elevating Fix’s legs when in on a shot, Gilman kept trying to finish below the knee, giving Daton just enough wiggle room to “rubber knee” out and score points of his own.

This series was very physical with both wrestlers being warned for hands to the face, in fact, Fix gave up a point in match two because of excessive aggressiveness in one of his clubs.

Match one was all Daton, as he came out on top winning 9-1. Only two seconds into the match, Gilman was warned for hands to the face. The first point was put on the board 1:30 into the match when Gilman got in on a leg attack, but couldn’t finish because of Daton’s abilities from the quad-pod position. Eventually, Gilman had to settle for just the push out. Thomas Gilman struggled to find any offense against the clearly evolved Daton Fix following that exchange. Forty-five seconds later, Fix took the lead on criteria when he was in on a shot and Gilman went to a quad pod. Daton was not able to acquire his takedown, so he settled for the push out point. With twenty seconds left in the first, Gilman got in on a sweep single, BUT tried to finish below the knee. Daton was able to straighten his leg, capture the far ankle, and get a takedown of his own. Fix then locks up a gut wrench on the outside of the mat to get two more points, and take the outright lead 5-1 at the break. The ability to wrestle after the leg was captured was definitely the difference maker in this series. Soon after the break, Gilman attacked the leg, and tried to finish below the knee, again. Unable to finish, Gilman was forced to return to his feet following the referee’s stalemate call. Immediately after the whistle, Gilman took a sloppy shot and Fix responded with a quick go-behind for his takedown, giving him the lead by 4 points. Gilman had very little time to make a very large deficit. He took a shot and again Daton went right to the quad-pod. As a response, Gilman tried to gut wrench him for four from that position, but Fix threw his leg over, planting Gilman on his back, and putting four points on the board for Fix. The match came to an end, and Fix took match one 9-1.

Despite Gilman’s initial defeat, he was able to come out during in his 2nd match. It started off with a hands-to-the-face warning on Daton immediately after the beginning whistle. Twenty seconds later Daton was charged with a caution and one for “unnecessary roughness”. With a minute remaining in the first period, Gilman shot in on a leg, but again tried to finish below the knee. Gilman just waited out the position and got a stalemate. The score was 1-0 Gilman at the break. Thirty seconds into the second half, Gilman takes another shot, tries to finish below the knee. Fix straightens his leg, captures the far ankle, and gets behind for two. Fix takes the lead 3-1. With two minutes left in the match, Gilman gets into a front headlock and chases the corner, but Fix squares up. Gilman then gets in on a head inside single, tries to finish below the knee, and after about thirty seconds Gilman gets the takedown. To take the lead 3-1, that is how the match ended and Gilman would force a match three.

Match three scoring started off when Daton was on the shot clock, but scored with four seconds left on it. Fix took a shot, Gilman reattacked, and Fix circled behind to get the two. With twenty seconds left in the first, Gilman attacks the leg and tries to finish below the knee allowing Daton to square up and get back to his feet. Fix leads 2-0 at the break. With a minute and forty-five seconds left in the match, Daton receives a point for Gilman not scoring while on the shot clock. Then, Gilman gets in on a leg but only gets a push out because of Daton’s quad-pod. With a minute and ten seconds left in the match Gilman was able to get a takedown, allowing him to lead on criteria. Gilman then was in on another shot, but tried to finish below the knee and Fix was able to get a takedown. Gilman’s corner decided to throw the challenge brick but lost, so Fix was awarded another point. Fix took the lead 6-3 and that was how the match ended. Daton Fix will represent the United States in Kazakhstan at 57kg.

In this series, Imar looked very good, the best I have ever seen him wrestle. Because Martinez wrestled so well, Burroughs had to up his game as well which made it a better series for the fans. The series was fun to watch because both wrestlers put lots of points on the board and were wrestling at a very high pace.

Match one scoring started out with Burroughs doubling Imar on the edge eight seconds into the match. Ten seconds later, Imar was in one a head outside single on the edge, but couldn’t get the takedown, so he had to settle for a push out. Imar took the lead on criteria 1-1. With a minute and forty-five seconds left in the first, Imar shoots Burroughs out of bounds again for another pushout, and take the outright lead 2-1. Forty seconds later, Imar shoots JB out of bounds once again for another step out point. With about a minute left in the match Burroughs is able to score off a reattack and take the lead on criteria. With thirty seconds left in the match they get into an underhook/overhook position and they go out of bounds. Originally they gave the point to Burroughs,but Imar’s corner challenged the call and the call was overturned. Which put Imar in the lead 4-3. Then, with twenty seconds to go Burroughs just hits another level and takes a shot. JB scores the huge takedown with five seconds to go to take match one 5-3, and the Bob Devaney Sports Center erupts.

With one minute off the clock in match two, Jordan Burroughs got in on a head inside single, but was not able to finish when Imar went to a quad pod position on the edge of the mat. JB had to settle for a push out and take the lead 1-0. Forty-five seconds later Burroughs is able to double Imar out of bounds and get another step out point to take the lead 2-0, the score at the break. Twenty seconds into the second half the Illinois native was able to shoot Burroughs out of bounds to receive a point. Only eighteen seconds later Martinez was able to get in on a nice head inside single and score a takedown to take the lead 3-2. Imar was then able to lock up a leg lace right away and get exposure points to widen the gap and make the score 5-2. With forty seconds left in the match, Burroughs is able to blast through Martinez and score a takedown, the score would now stand 5-4 Martinez. Twenty-five seconds later Imar was charged with a caution and one for fleeing the mat, but still remained in the lead on criteria 5-5. The two competitors got into a flurry along the edge of the mat as JB was trying to take the lead and win the match with a push out, but Imar fought off the pressure and stayed in bounds. Burroughs’ corner threw the challenge brick because they thought the JB should have earned a push out, but the call would remain the same. Imar would then get an extra point for a failed challenge. Winning the second match 6-5, Isaiah Martinez would force match three.

In match three, we saw the Jordan Burroughs we are used to seeing as he came out on top in this one 7-1. The first points were put on the board when Burroughs got in on a head inside single and was able to finish with 2:32 on the clock. With a 1:10 left in the first JB was able to get in on another head inside single, and then ten seconds later the Nebraska Native was able to score the takedown. A mere ten seconds later Burroughs scored again when Martinez took a shot but got pancaked out of bounds rewarding JB a point and Jordan Burroughs took the lead 5-1. JB was then able to score again when Martinez was grounded on the edge of the mat but Burroughs locked up double underhooks and was able to push him out of bounds. The score would be 6-0 JB at the break. Five seconds into the second the wrestlers got into a flurry and JB was able to circle Martinez out of bounds to take the lead 7-0. That would be all the points Burroughs would put on the board, but that would be enough to win the match and make his ninth world team. All Martinez would be able to get would be a step out with twenty seconds left in the match making the final score 7-1. Jordan Burroughs will be representing the United States at 74kg in Kazakhstan.