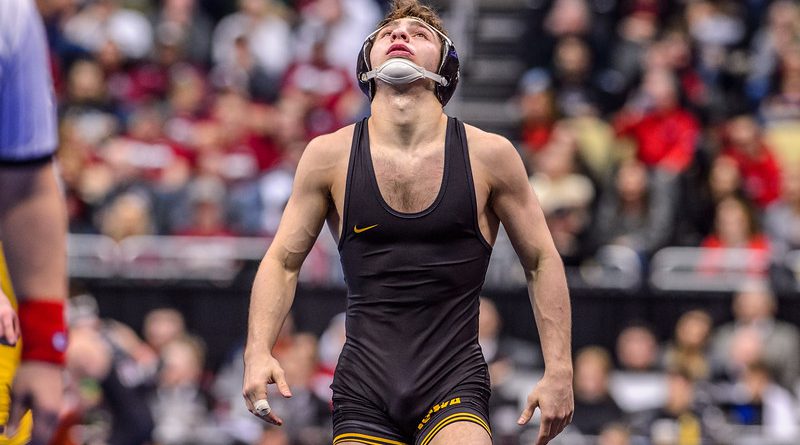 Iowa and Wisconsin clashed last night in a dual featuring a pair of top-ten teams and all sorts of individual superstars. As is often the case inside of Carver-Hawkeye Arena, Iowa rolled and picked up a pair of upsets along the way en route to a 32-3 victory over the Badgers. Austin DeSanto and Anthony Cassioppi both notched wins over highly-ranked opponents for the Hawkeyes and graduate transfer Johnny Sebastian provided the lone win for the Badgers. On a night that wasn’t short on upsets or exciting matches, a few things stood out to me above all else. Here are my top six takeaways from the night that was in Iowa City:

When it became official that Seth Gross was granted a sixth year of eligibility and the trio of Stevan Micic, Nick Suriano, and Daton fix were all taking Olympic Redshirts, 133 was assumed to be Gross’s weight to lose. Last night’s dual in Carver Hawkeye Arena changed all of that, with Austin DeSanto controlling Gross for the majority of their bout and cruising to a 6-2 win. Is it possible that Gross still hadn’t recovered from his cut to 57 kg for the Bill Farrell? Absolutely. Is it also possible that DeSanto has jumped levels again and is the guy to beat at this weight moving forward? Absolutely. Only time will tell if this is just a blip on Gross’s radar or indicative of the field catching up to one of the nation’s most dominant wrestlers, but the level to which DeSanto controlled the bout last night leaves little doubt that he is a legit NCAA title threat. It wouldn’t surprise me to see Gross put a lot of effort into scoring early to get his chance on top while he’s still fresh if and when these two meet again. Everyone knows that Gross is lethal on top, but turning someone like DeSanto becomes exponentially more difficult when they have a 6-2 lead and no stall warnings. During his 2018 NCAA title run, Gross attacked early and built huge leads by getting on top while he was still fresh, so I would have to think that will be the gameplan moving forward. That said, this weight got a lot more interesting with last night’s result.

2. Mikey Kemerer is a very real title contender at 174

Mikey Kemerer has been elite at his respective level basically his entire career, so this takeaway seems a little obvious but hear me out. This is a guy that just came off of major knee surgery and has moved up two weights since his most recent NCAA Tournament in 2018. Those two factors can naturally lead to some uncertainty, even with someone as consistent at Kemerer, but what I saw out of Mikey last night answered any questions I may have previously had. He was attacking constantly and showed no signs of the knee injury that prevented him from competing last season. He also looked every bit of 174 pounds and his gas tank, one of Kemerer’s calling cards, didn’t suffer at all. Was he wrestling a top-tier guy? No, but that doesn’t mean that last night’s performance didn’t illustrate that Kemerer belongs squarely in the NCAA title conversation at this weight. Whether or not anybody can beat Mark Hall remains to be seen, and Jordan Kutler is elite in every position, but Kemerer showed that the layoff and change in weight haven’t affected him negatively. How he matches up with Kutler and Hall will be interesting to watch as both guys are best when their opponent attacks them, something that Kemerer will do in bulk. Any time that you have elite wrestlers whose styles pit strength against strength, it’s going to be a fun match to watch.

Cash Wilcke got his first dual start of the season last night, and it did not go exactly as he had planned. Wilcke scored a takedown early but looked to wear down as the match progressed and eventually lost in SV2 to Johnny Sebastian. Granted, Sebastian is a quality guy that has accumulated some good wins over the course of his career and maybe the move to Madison has helped him jump levels, but Wilcke simply did not look sharp and that point was only further highlighted by him being the lone Hawkeye to lose Sunday night. Insert Nelson Brands, the redshirt freshman and son of Hawkeye coach and legend, Terry Brands. Nelson started the first two duals of the year while Wilcke was still recovering from injury and knocked off a pair of ranked opponents in the process, including then #4 Sammy Colbray of Iowa State. Granted, Brands is small for the weight and Wilcke had one relatively poor performance coming off of an injury, so I seriously doubt that any long-term decisions are being made right now and Iowa is known to use Midlands as their de facto final wrestle-offs. For now, I would expect to either see Brands as the starter or the two alternating starts until Midlands comes and they can settle it themselves through competition. I think Brands has done too much with his small opportunity to ignore him as an option, and Wilcke’s performance last night only added fuel to the fire.

4. The transfer portal is changing how teams are built

Five wrestlers who started their careers elsewhere took the mat in last night’s dual – Seth Gross (twice), Tristan Moran, and Johnny Sebastian for Wisconsin, Austin DeSanto and Pat Lugo for Iowa. Three of the five came away victorious, and one of the losses was suffered by Gross at the hands of a fellow transfer in DeSanto. Throw in Jaydin Eierman standing in the tunnel behind Iowa’s bench, and there were six high-level wrestlers in the building that have transferred programs. Now, college kids can transfer for a lot of different reasons – family, academics, proximity to home, etc – but with the introduction of the transfer portal and new NCAA rules that allow student-athletes to transfer without needing a release, the landscape has changed. Transfers are quickly becoming the inside track for power programs to cover holes in their lineup with a proven commodity instead of recruiting a kid out of high school. Iowa could very well win the NCAA title this year and next, neither of which would be super likely without the services of Austin DeSanto, Pat Lugo, and Jaydin Eierman. Elite programs can focus on recruiting only the absolute best recruits coming out of high school and attracting the unhappy studs away from smaller programs after they have proven themselves at the college level. I’m not sure what a super team would look like in college wrestling, but I think we’re going to find out in the next few years with these transfer rules.

5. Tony Cassioppi is living up to the hype

Few Hawkeye upperweights have generated as much excitement right out of the gates as Anthony Cassioppi. The Illinois native was a top recruit coming out of high school and, although he didn’t compete much, the hype around him only grew during his redshirt year last year. Needless to say, he proved that they hype has been for good cause by knocking off third-ranked and returning All-American Trent Hillger in the first home dual of his Iowa career. Cassioppi scored the only takedown of the bout on a textbook re-attack in the first period and made it stand up for a 3-2 win. This win vaults Cassioppi near the top of the rankings and shows the nation that age is not a factor for the young Hawkeye. Whether or not he can compete with Anthony Cassar has yet to be seen, but there is not doubt that Iowa has found their heavyweight of the present and future in Tony Cassioppi.

6. Iowa looks like the team to beat in March

I know that Penn State has won eight of the last nine titles and that they are borderline impossible to bet against in March, but this Iowa team is absolutely loaded from top to bottom. All ten weights are threats to be on the podium in March and they have title contenders in Lee, DeSanto, Young, Marinelli, and Kemerer. Nelson Brands’ emergence at 184 would be an enormous boost if he can continue to compete at an elite level and Anthony Cassioppi is going to pin a lot of guys and place high even if he isn’t a serious threat to beat Casser, which is still possible. Penn State will certainly be right there in the hunt with Cenzo, Hall, and Cassar leading the way but the uncertainty at 125 and 197 are definitely cause for concern in a year where they don’t have bonus point machines in their lineup like they’ve had with Nolf, Nickal, Retherford, Ruth, and Taylor. Right now, I think that Iowa is a slight favorite but there is so much wrestling left to be done. If nothing else, this year’s NCAA Tournament should have one of the most memorable team races in quite some time.