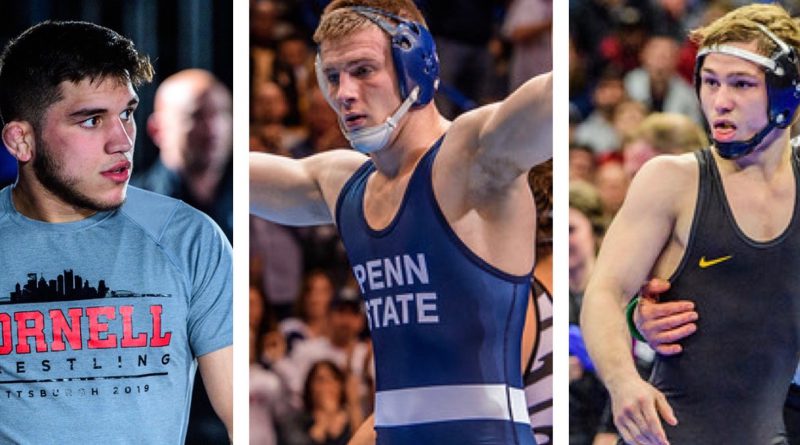 Every day that passes brings us closer to the Olympic Team Trials, where all will be made clear and our USA Men’s FS team will be decided. This weekend, December 20th-22nd, the Senior Open National tournament will serve as yet another qualifier for the OTT, with the top five place winners earning a qualification spot for the Trials in State College this April. The Home Mat Advantage crew will be keeping you all satisfied with plenty of content concerning the upcoming events, with these next articles previewing every weight at wrestled at Fort Worth, Texas.

After an exceptional performance at the Bill Farrell, Nick Suriano comes into this weekend’s US Open as the favorite in most people’s eyes.  Granted, Nathan Tomasello did finish one spot ahead of him at the Farrell (second, as opposed to third) but Suriano was the only one of the pairs that pushed Seth Gross.  Both Suriano and Gross handfight extremely well, but Tomasello is going to pull the trigger more than Suriano if history is any indicator. Suriano picks his spots very well and is very difficult to score on, making points that much more valuable against him.

Zane Richards had a bit of a surprising showing at the Farrell, wrestling his way to the semis before falling to Tomasello and Suriano in consecutive bouts.  Richards is another guy that will handfight all day long and his offense is predicated on being able to get to an underhook or collar tie. His win over Nahshon Garrett in the quarters at the Farrell was the biggest win of his senior level career and he will look to keep things rolling this weekend in Texas.

Speaking of which, Nahshon Garrett may not be the favorite this weekend but he is always one of the top contenders in any bracket he enters.  Nahshon looked a bit sluggish at times at the Farrell, but he is as dynamic as they come when he is firing on all cylinders. I would expect for him to really let it fly and be involved in some high scoring affairs like we have seen him do in the past.

The biggest wildcard in  this weight, and arguably the tournament, is Iowa junior Spencer Lee.  This will be his first freestyle tournament since Junior Worlds in 2016. The Pennsylvania native has won three age-level world titles and has to be considered one of the favorites at this weight, if not the favorite in some people’s eyes.  He has a win over Suriano in folkstyle and his freestyle pedigree is as extensive as any collegiate wrestler in America. This weekend could turn out to be a rematch of the aforementioned 2018 NCAA Finals, where Lee won his first title via a 5-1 decision over Suriano.

Other guys more than worth mentioning are Darian Cruz and Vitali Arujau.  Cruz was an NCAA Champ in 2017 and is one of the most exciting wrestlers at this weight when he opens up and pulls the trigger.  He advanced to the finals of the 2019 World Team Trials, where he fell to Thomas Gilman in two straight matches, and it would not be a surprise to see him wrestling in the finals again this weekend.  As far as Arujau goes, he has a longstanding record of success in freestyle and he will be looking to continue that trend at the senior level. He has a unique style and is dangerous in any position, so make sure to keep an eye on him any time he is on the mat.

At the end of the day, I think it will be Spencer Lee coming away win his first Senior US Open title with another finals win over Nick Suriano.  Lee is such a proven winner at every level and I am really excited to see how he looks in his first freestyle tournament in some time. Outside of that, I expect Nahshon to turn in a strong performance and finish third after slipping a little at the Farrell.

Once again, 65 kilograms is the deepest weight class in the country, with twelve of the competitors predicted to be seeded. Take a look at the Wrestling Nomad’s preseeds:

Luckily for us, we actually have seen plenty of these wrestlers in the past year, with seven out of the twelve competing in the 2019 Bill Farrell a month ago. At the top, Yianni D holds steady with the well-earned No. 1 seed, and after making it to Final X: Rutgers summer nobody is debating that he can go deep again. He’ll encounter some of the same competition that he faced at the U.S. Open earlier this year with Jordan Oliver at the No. 2 and Frank Molinaro at the No. 3. These two wrestled in the finals of the Farrell with Oliver coming out on top, but Yianni had beaten both of them pretty bad at the Open, and I predict a similar result here. The next four wrestlers are a toss-up for me: Henderson placed third at the Farrell with a close win over McKenna and a tough loss to Molinaro, so he should make the top four. But McKenna has at least one loss to Bryce Meredith, who got teched by Henderson. And, you can’t forget the brand-new Hawkeye Jaydin Eierman, fresh off of his U23 World Championship experience and hungry for some wins. Truthfully, he’s the one I’m the most excited to see, especially because of the crazy matchups we could see. Eierman/Ness? Eierman/Demas? One can only dream about the points scored in those matches!

Here are my picks for the top five place winners at Fort Worth this weekend:

At the end of the day, I don’t see anyone touching the top three. Yianni has cemented himself firmly in the #1 spot for this tournament and Molinaro/Oliver shouldn’t dethrone him. While there’s a whole lot of talent the rest of the field, I believe that Henderson and Eierman have the offense to rise above the rest.

HMA is writing weight-by-weight previews for the entire Senior Nationals this weekend. There are a million storylines to cover in Fort Worth, Texas, so let’s just jump right in.

I, Sam Herring, will be covering 74kg and 125kg. To begin our deep dive into 74kg, let’s take a look at all the competitors listed at this weight (list last updated on December 17, 2019).

The rest of the field:

Most of the top wrestlers have fairly recent head-to-head matchups, making my job pretty easy. The Wrestling Nomad made some handy predictions on the seeds for this event. Take a look at them below:

Now, we have to keep in mind that 3x NCAA champion, Jason Nolf, and 2x NCAA champion, Vincenzo Joseph, are still yet to register (as of December 17), and—after Nolf’s knee injury at the Bill Farrell—it is possible that he will wait until the Last Chance Qualifier to qualify himself for the Olympic Team Trials in Happy Valley. For the purpose of this preview, however, I am going to assume that Nolf and Vincenzo will compete, and thus, Nolf will claim the one seed and Cenzo with the three seed. If we do see Nolf in Dallas, he will be the clear favorite after his performance at the Bill Farrell.

Carson Kharchla is a really interesting story because of his age. Carson is a redshirt freshman at Ohio State this year and is most likely chomping at the bit to get back on the mat. Make sure to keep an eye out for him this weekend in Dallas. Along with Carson, Dylan Ness is a solid pick for a dark horse. I wouldn’t be surprised if Ness gator baconed everyone in his way to a Senior National title.

Let’s get into some picks and matchup discussion. In my eyes, it’s down to Nolf, Kulchytskyy, Joseph, and Lewis. After Nolf’s amazing performance at the Bill Farrell, he is the clear favorite in my mind. Behind Nolf is Kulchytskyy then Joseph and Lewis. Joseph and Lewis are now 1-1, and due to my recency bias, I am picking Joseph to finish 3rd.

And there you have it. All the lightweights at the 2019 Senior Nationals have been officially previewed by HMA Wrestling! Stay tuned for an upper weight preview, women’s freestyle, and men’s Greco- all dropping soon!