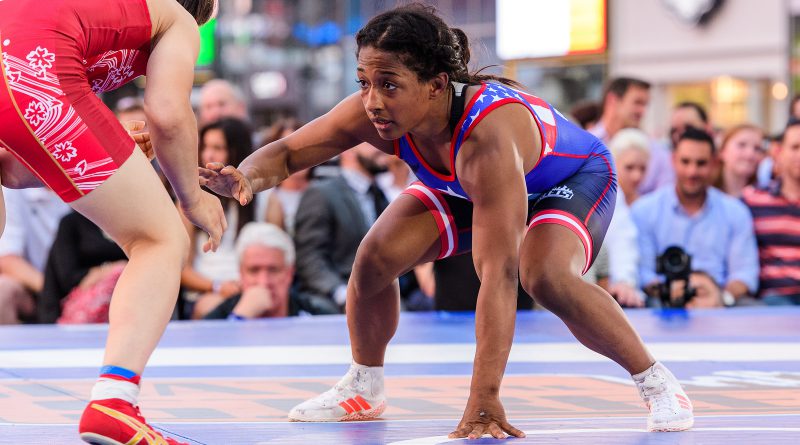 With each passing day, the Olympic Trials get closer and tensions run higher as countless athletes try to turn a lifelong dream into reality. But before one can win the Trials to claim a spot on the Olympic Team, they must first qualify for the Trials. This weekend’s Senior Nationals is one of the best opportunities to do so, with the top five finishers at each weight will earn a berth in next Spring’s Trials. Expect to see some of the best wrestling on the planet from seasoned veterans and newcomers alike in Forth Worth. Below, I dive into each weight a little bit to paint a picture of where things stand heading into the weekend.

The clear favorite at this weight is Victoria Anthony, who has twice finished fifth at the World Championships. Vicky can score points in bunches and has an inside trip that’s as good as any you will see at any level of wrestling. She has been one of the more consistent WFS athletes in America and all signs point to her cruising through this weight in Fort Worth.

Another entry at this weight possessing World Championships experience is Alyssa Lampe, who has competed scarcely in recent years and is a bit of a wildcard as to how she fits into this group. She won a pair of bronze medals at the 2012 and 2013 World Championships, but obviously a lot of time has elapsed since then and it will be interesting to see how she looks this weekend.

Amy Fearnside gave Anthony a run for her money at the US Open earlier this year, but Vicky has put space between the two of them since. That said, Fearnside is a serious threat to make a deep run at this weight and a potential semifinal match-up with Lampe could serve as a measuring stick for how much she has grown and developed since the World Team Trials over the summer.

A younger entry to keep your eye on as this weekend progresses is Minnesota native Emily Shilson. She is yet another product of the Pinnacle Wrestling School run by Jared Lawrence and Brandon Paulson and she has won just about everything under the sun, ranging from numerous Fargo titles to a Cadet World Championship and a gold medal at the Youth Olympic Games.

This will be one of the more interesting brackets to watch this weekend, as it combines a few veterans with some younger athletes that are changing weights for the Olympic year. Katherine Shai, Tiare Ikei, Dominique Parrish, and Areana Villaescusa are probably the four most noteworthy returners at this weight. Shai has made six national teams and has been second or third at a number of World and Olympic Trials over the years, but she has yet to have her breakthrough moment.

Parrish and Villaescusa are both moving down from 55 kg and have gone back in forth in their matches up until this point. Parrish is ranked fifth at 55 kg and is fresh off of a collegiate career that culminated in her winning the Miranda Medal, which is awarded to the top women’s college wrestler in the country. Villaescusa is ranked third at 55 kg and will look to climb that ladder a little higher between this winter and next spring.

Gracie Figueroa, Felicity Taylor, and Ronna Heaton are three younger wrestlers to watch at this weight as well. Figueroa won a WCWA title in the spring and is a serious threat to win this weight. Taylor is currently enrolled at McKendree and could be the best collegiate wrestler in the event. Heaton has won a gold medal a the Cadel World Championships and is always a threat to make a deep run any time she competes.

This weight may be the most difficult to predict out of the 18 that will be contested across the three styles this weekend. There are certainly some favorites, but just exactly how they match up with one another and how things will shake out is almost impossible to predict but it’s worth trying anyway.

Lauren Louive is coming off a Final X berth over the summer and she has a lot of experience under her belt. The Hawkeye WC member is a very consistent competitor and seems to be on the upswing, so look for her to be wrestling in the finals of this bracket.

Kelsey Campbell was an Olympian in 2012 and is looking to wrestle her way back to another chance at the sport’s ultimate prize. She is a stalwart of American women’s wrestling and could be a serious threat to not only win this weight, but to make the Olympic Team when next spring rolls around.

Alex Hedrick was a Final X runner-up in the summer of 2018 and she has the potential to break through this weekend. She has lost some close bouts to Campbell in recent months and she gave herself chances to win each of them, so don’t be surprised if she comes back having made a few adjustments and wins this weight.

Cam Guerin is a rising star that is more than worth watching at this weight. She was third in the 2019 US Open and represented the USA at the 2019 Junior World Championships. She has the potential to be the future face of this weight for years to come, so keep an eye on her.

This should be one of the weights that produces fireworks starting early in the bracket due to an abundance of talent. Maya Nelson and Macey Kilty headline an entry list full of absolute hammers, and for good reason. Nelson looked outstanding all spring and summer on her way to a Final X berth, where she lost to Forrest Molinari in a brutal three match series. After taking some time to make adjustments and come back stronger and better, expect to see the best version of Maya that we’ve seen yet.

Macey Kilty has been a star at the age group level for quite some time now, and the 2019 World Team Trials saw her start to break through at the senior level as she made a run to the finals in Raleigh. Kilty is skilled in every position and is a student of the sport, so she has multiple ways to win matches. Another product of the Pinnacle Wrestling School, Macey brings a wealth of knowledge, talent, and experience with her to Forth Worth and she expects to leave with another title.

Emma Bruntil finally got herself fully healthy again, and it has proven to be worth the wait. Bruntil missed a substantial period of time due to an elbow injury and the associated rehab, but she has come back on a tear this year. She placed fourth at the Bill Farrell, splitting matches with Mallory Velte in the process, and has been lighting it up as a freshman for McKendree. She may not have the same name recognition as Macey Kilty, but she is every bit as much of a star in the making, if not the present.

Alara Boyd, Julia Salata, and Michaela Beck are all also names worth mentioning at this weight and each has the potential to make a run to the finals if they compete well. Salata has competed at seemingly every weight from 62 kg and above in the last few years and has consistently been one of the best at each weight. Beck is a member of the Hawkeye WC and will look to parlay her age group success to a grander stage during the Olympic year. Boyd is another freshman at McKendree who has the ability to make a mess of this bracket and win it outright. Like I said, this bracket should be fun.

Just like 65 kg, this bracket is loaded with talent and is a prime example of what makes Olympic years so much fun – condensed fields and rarely-seen match-ups. Forrest Molinari and Victoria Francis were both 2019 World Team Members (and fifth place finishers) at 65 kg and 72 kg, respectively, and they will converge on this weight for this year. Molinari is well known for her high pace and vicious handfighting abilities, not to mention she has one of the best mean mugs in the sport.

Francis, like Molinari, has competed in a pair of World Championships but is looking to make her first Olympic Team. With a long track record of success and a skillset to match the best in the world, there is no reason to think that she can’t make it happen to win this bracket and, eventually, win the spot for Tokyo.

Alexandria Glaude has not broken through to the extent of Forrest and Victoria yet, but she was a 2019 Final X runner-up and is ranked atop the NCAA women’s rankings for McKendree. She will undoubtedly be one of this weight’s stalwarts for years to come and she could take a big step towards making her first Olympic Team this weekend.

Randi Beltz and Jackie Surber-Cataline have both won the US Open and bring a wealth of experience and skill to this bracket. If either of these women were to walk away with the title in Fort Worth, nobody should be the least bit surprised.

Last but certainly not least, we have the heavyweight division that is headlined by a wealth of young talent. Precious Bell was a Final X runner-up and US Open champ in 2019 and she will be looking to keep that momentum rolling in Fort Worth. She is currently ranked first in the country in the NAIA rankings while competing for Menlo and is one of the brightest young stars in American women’s wrestling.

Korinahe Bullock has had success at the age group world level with a bronze at the 2018 U23 World Championships and she is looking to make another jump and claim a berth to the Olympic Trials in April. She is currently a junior at McKendree and will be trying to make some noise alongside of her teammates in Texas.

Dymond Guilford was a WCWA and NAIA champ in her time at Missouri Baptist and she will look to claim another national title this weekend. Although Bell is definitely the favorite, I don’t think that anyone should be surprised if either Bullock or Guilford comes away as the heavyweight champ.