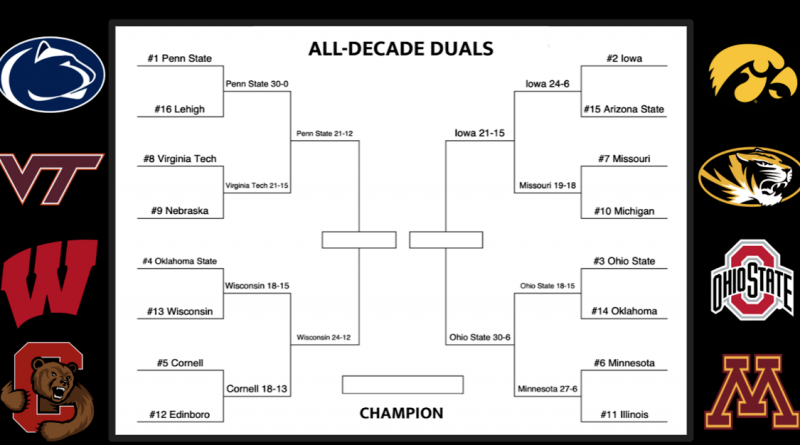 After a wild round of sixteen to open the All-Decade Duals tournament, the HMA team kept grinding and brought on some elite guests for the quarter-final matchups. The quarters were even more action-packed and birthed even more upsets and dream matchups. If you’ve got the time, I would highly recommend listening to all of the episodes that are linked below. If not, let’s dive into the highlights of the quarter-final round!

If you thought the round of sixteen was fire, you’re getting more where that came from in the quarters. Christian Pyles rejoins the show to attempt to take out the Penn State dynasty with his Hokies.

After winning the coin-flip, Pyles chooses to start the dual at 149 pounds. Starting against Retherford is obviously not an ideal move, but when you look at PSU’s lineup it doesn’t really matter where you start. The opening match of the dual starts in the traditional neutral position. Zain commits to a double after multiple fakes but is met with a perfectly timed sprawl to a front-head position. The crowd is still gathering their snacks and finding their way to their seats as, out of nowhere, Sal Mastriani decides to pull the trigger on a Cement-Mixer from the front head position. The Penn State crowd is silenced as Mastriani pulls off the major upset with the fall over 3x NCAA Champion Zain Retherford 0:39 seconds into the first period. VT leads PSU 6-0 after the first match.

After the unthinkable happened at 149, most of the dual pretty much goes as planned for PSU. Nolf, Taylor, Hall, Ruth, Nickal, and Cassar all take care of business and improve the score to 18-6 PSU. The only match in that run that was a close one, was Taylor vs Lewis. In the end, Taylor’s offense is too much and Lewis fails to upset another 2x NCAA Champ from PSU.

Coming back around to the small guys gives the Hokies a glimmer of hope as Dance takes out Megaludis and Carter downs RBY. Both are great matches that could have gone either way, but the Hokies find a way to get it done and set up a dual-deciding final match. PSU 18-12.

Nick Lee realizes he has to take care of business against Chishko because, in the event of a Virginia Tech pin, the dual would be tied and go to criteria. The deciding criteria would be bonus points, and Tech is currently the only team possessing bonus. This doesn’t weigh too heavily on Lee’s mind as he takes care of business and wins the dual for the Nittany Lions 21-12. Great match and closer than we originally thought.

In the second quarter-final, we pit Bear and Badger against each other to find out who will face Penn State in the next round. Seth Gross and Jack Mueller join the HMA boys to dive into the most exciting dual of the series thus far. Wisconsin elects to start the dual at 184 pounds and we’re off! The Big Red take the first two matches before Wisconsin strikes back at heavyweight. Cornell also takes 125 pounds as Troy Nickerson flirts with bonus points, but none will be given until the semi-final round.

One of the highlight duals of the night is up as NCAA Champion, Seth Gross walks to the center of the mat to meet fellow NCAA Champion, Nahshon Garrett. The HMA crew argue back and forth about the match as Jacob and Seth proceed to argue about the hypothetical folkstyle match. Seth argues that, although he is 0-2 against Garrett in freestyle, he believes that his top game would be the difference-maker in this folkstyle matchup. Jacob believes that Garrett has “superpowers” on his feet and would win the match there. In the end, Gross prevails by a vote of 3-2. I guess the top-game was a factor after all.

Yianni, Ruschell, and Jordan all earn wins for their respective teams in the following three matches before we hit our next highlight match of the dual. Going into the Dake vs Howe matchup, the dual is tied 12-12. Are the Badgers really about to pull off another huge upset? The match starts as both men lock up and heavy hands are exchanged. Howe shoots a short double into a body-lock. Dake fights to regain control, but Andrew Howe has strength like no other man. Howe crunches the body-lock and drives in to put Dake to his back. Dake fights to get off of his back, but there is no escaping when Andrew Howe puts you on your back. The first landmine of the dual is used as Howe sticks Dake to put the Badgers up by 6 heading into the final dual.

In the final dual, the only shot for the Big Red is for a Mack Lewnes pin to send it to criteria. However, in the words of Jack Mueller, “If you’ve ever wrestled in a dual meet and stepped on the mat after your teammate gets a big pin, you know how much adrenaline is running through Ryan Christiansen right now”. Christiansen also puts Lewnes to his back in period number one and secures the fall for the dual’s second landmine.

Upset number two is complete for the red-hot badgers 24-12. Wow.

For the Ohio State vs Minnesota dual, the team is joined by one of the greatest wrestlers of all time, Logan Stieber. Stieber is one of only four four-time NCAA Champions in the history of the sport, a World Champion, and one super-competitive guest picker. Stieber chooses to start the dual off at 157 pounds in an attempt to shut the Gophers out with a first-match upset. He walks us through a situation that has Ness coming in hot off of a fall via “Gatorbacon” over Isaiah Martinez and he tries it again on Micah Jordan. In his attempt to do the same thing to Jordan, he slips a bit and goes straight to his back. Jordan controls him to the ground and secures the fall. Buckeyes 6, Gophers 0.

Before the first match, the Buckeyes go on a tear for the next 6 matches before they hit a real challenge. Storley gets close to taking out Heflin at 174, Moore vs Schiller is an intriguing match-up at 197, and NATO vs Lizak is a fun conversation, but Ohio State ultimately takes the matches. The highlight match of the dual is up at 133 pounds. Logan Stieber vs Jason Ness would be fireworks in a real match. Both wrestlers are NCAA Champions and Hodge Trophy winners, but Stieber is a 4x Champ, and as great as Ness was, there is not much of an argument for him to beat Stieber. Plus, try picking against one of the greatest of all time, while he is on the call with you. You won’t.

In the second-to-last match, Pletcher takes out Mikey Thorn, which sets up a 30-0 lead for the Buckeyes going into the final match. Stieber is glowing with pride that his Buckeyes have a chance to shut out the Gophers in the quarters. The matchup between Lance Palmer and Brayton Lee certainly favors the Bucks at this point in Brayton’s career and tOSU is sitting pretty. However, Jacob chooses to use his only landmine of the quarters to propel Lee to the “lefty-headlock” pinfall over Palmer. Stieber gives Jacob crap for his move, but we had Brayton on the show last round and Jacob couldn’t let the Gophers get blanked with Lee in the final bout. The dual ends up 30-6 Buckeyes as the #3 Ohio State Buckeyes advance to the semi-finals!

In an earlier-morning dual, Matt McDonough joins the show to give his take on the Hawkeyes vs the Tigers. This is a special episode for the HMA crew because not only do they have 2x NCAA Champ, McDonough on the call, they also get to hear his perspective on the Spencer Lee vs Anthony Robles debate. This has been a HUGE debate lately with the Flo guys bringing it up on FRL. McDonough might be the only man to wrestle both Lee and Robles, so his opinion on the matter is probably the best you can find. Tune in to the show to hear his take.

The Tigers choose to start the dual off at 174 pounds. In exciting fashion, Samuel Herring throws his landmine down in match number one. While Borschel is the heavy favorite in this match, Sam reminds us that Dan Lewis is the only man in college to pin Zahid Valencia. Lewis has an insane cross-face cradle that he uses to crunch Borschel up and secure the fall for the Tigers in a huge upset over the NCAA Champion. McDonough is adamant that this would NEVER happen, but there’s nothing he can do to help his former high school teammate.

The next match sets up the best interview in college wrestling, Sammy Brooks, vs NCAA Champion, Max Askren. Askren is favored in this match and the voting seems to be trending that direction, but in surprising fashion, Jude throws down the second and final landmine of the dual to get the bonus points for Askren. Askren via fall over the mullet Sammy Brooks. The Tigers are stunning this crowd jumping out to a 12-0 lead over the Hawkeyes after the first two matches.

J’Den Cox takes the next match over Nathan Burak after some conversation and the Tigers are up now 15-0. Are the Hawks in trouble? The answer is, no. The Hawks then proceed to win the final 7 matches of the dual with little disagreement. Marion vs Eierman would be a great match between one of the best to never win a title (Marion) and the newly transferred Hawkeye (Eierman), but the crew makes the wise decision and picks the 2x finalist Marion. We also had to stop and talk a bit at 149 pounds because of a message we got on Twitter. Two-time world champ, J’Den Cox messaged in to let us know that he voted on our poll and would love to see a Metcalf/Houdashelt matchup. Pretty cool to not only be getting input from the best wrestler in the world but having him be one of the first to put his votes in on the poll. While I agree that Metcalf vs Houdashelt would be great to see, the answer here is Metcalf.

After some early adversity, the Hawkeyes cruised to a 21-15 win over the game Missouri Tigers. This sets up a #2 Iowa vs #3 Ohio State semi-final that promises to deliver fireworks.

Make sure to tune in this weekend to hear the semi-finals go down! We will have a guest picker from each team for each dual and will be introducing bonus points into the mix. The semis are set!