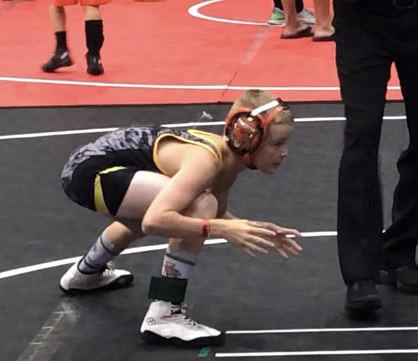 My name is Dominic Deputy, and I am 12 years old. If you don’t know, I am the co-host of the Wrestling Recess Podcast, partnered with PA Power, a Pennsylvania wrestling news site. But there is a long story to how I got here.

Sam Herring, one of HMA’s hosts, was in Johnstown, PA (where I live) training at the Compound, Young Guns, and Ranger Pride Wrestling. I asked him one day how he got so popular with Flowrestling, to which he responded, “I asked a bunch questions on FloWrestling Radio Live, and they have kinda taken me under their wing and helped me move along,” and believe it or not, I didn’t have a clue what FRL was.  He told me about it, and immediately I knew that I had to start listening.

When I heard about Sam and his friend Jude Swisher starting a podcast, it really caught my interest mainly because they were not grown-ups but kids just like me, and it made me wonder if I could do something like that. A little after they started, my friend Dysen Gould, who I train with at Young Guns, started Wrestling Recess. I figured that it would actually be possible for me to make my own podcast. I scrambled for some names, and came out with The Wrestling Funk. Which in my opinion was not the best name, to be honest, but you don’t need a good name to just talk about wrestling.

So once I got everything set up, I messaged one of my favorite wrestlers, Pat Glory from Princeton, and asked him if he would be interested in being on my podcast. He was really nice about it. I remember being really nervous and after the interview, I couldn’t find the audio. I panicked, but after Sam helped me, I was so relieved. I did a couple more with some big names (Reece Humphrey, Grant Leeth, Jaydin Eierman, Nate Jackson, & Pat Brucki) and learned some things along the road.

Then one day, I got a call from Dysen about coming together on Wrestling Recess. We discussed some things and finalized it, and there we were.

We did another episode together, then I was going to have PA Power’s Eric Knopsnyder on to discuss the Dake/Deringer wrestle-off. I also asked about helping them with anything. He said we could help them and he began talking with me and my dad. I guess we just came together; they were really nice and bought us microphones and stands. They also helped us learn how to use our new recording site! They helped us so much and our content got far better.

We asked if there was anything we could help them with and they kept giving us stuff that we could do, but to us, it wasn’t really a job, it was more like we get to be more involved with the sport!

Doing this podcast has benefited me in both wrestling and academic levels. It has shown me how all these college and senior-level wrestlers have made themselves better in both wrestling and academic standpoints. If you don’t know, my goal is to go to either Princeton, Lehigh, or Cornell, and so I always ask about how they handle both their academics and wrestling. So far all the wrestlers have said that academics always come before wrestling. My dad always makes a point to me to not let my podcast take away from my wrestling, but this isn’t a problem because my first passion is the activity of wrestling.

I am excited to see what the road in front of me holds as far as wrestling and media, but it has been enthralling so far, and I know it will stay that way.