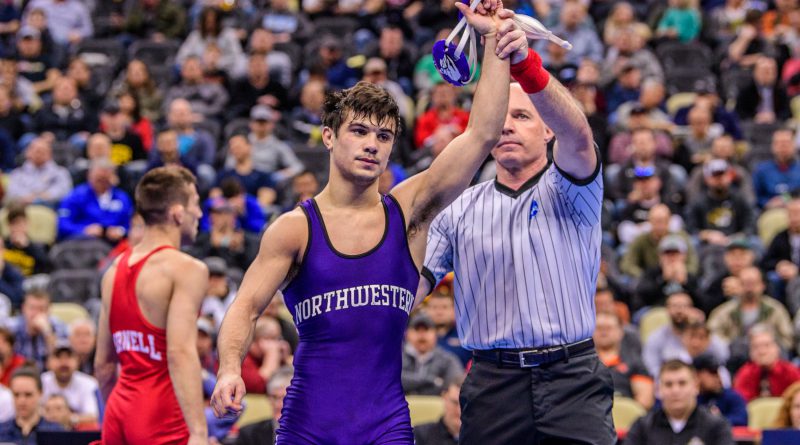 While some wrestlers will score big points for your team, Week 9 is going to be an all-or-nothing fantasy weekend. I say that because there are only two wrestling events, so there will be very few people not taking at least one loss. Taking that into account, we will need to be very selective with the wrestlers we start.

Tune in live on Flowrestling to see it all go down live on December 29th and 30th.

There are a couple of factors looming heavily over the Week 9 fantasy landscape at 125 pounds. The main one being if Spencer Lee will be at Midlands? Lee competed and won the US Senior Nationals this weekend. He dominated the field on his way to qualifying for the Olympic Trials and, in a lot of people’s minds, being the favorite to represent the US in Tokyo. If he enters the Midlands Championship, he will be the favorite to win it, but we likely won’t find out until this weekend. In the event that Lee does wrestle, start him obviously.

If Lee is held out, Pat Glory will more than likely decimate the field on his way to a Midlands title. He should be started regardless of the situation with Lee. Even if he takes a loss to Lee, he will earn several bonus point wins. More than enough to overcome a loss.

Another guy I’ve been high on this year is Devin Schroder. He has looked like a new man this season; posting a 53% bonus rate. This is another situation, like Glory, where Schroder will likely take a loss. However, his bonus likelihood will guarantee your team points.

Lastly, there are several good guys in action at the South Beach Duals. One of which is Pat McKee. The McKee brothers know how to do one thing extremely well, pin their opponent. Of his nine wins on the season, five have come via fall. If you see this name in your free agency portal, pick him up and start him right away.

Desanto, Gross, Rivera all in the same tournament. Someone pinch me, I think I’m dreaming. They will finish 1, 2, 3 in some order; so the most losses each will have in one. That means lots of fantasy points, given the 4-5 matches, they will have each. Start all three, then sit back and enjoy.

While we are all distracted by the jewel that is the Midlands 133lb weight class, an exciting opportunity for fantasy owners of Tucker and Bridges exists as well. They met a couple of weeks ago in the CKLV finals, with Tucker reigning supreme. If we get to see the matchup this weekend depends on how the team duals go, but they will both certainly pick up many wins on the weekend.

While there aren’t as many big matchups slated for this weekend at 141lbs, there are plenty of top fantasy scorers in play. The #1 fantasy wrestler in the nation, Mitch McKee, will be sticking people’s backs on the mat down at the South Beach Duals. McKee currently leads all college wrestlers in the nation with 69 fantasy points. His 75% bonus rate is scary when your fantasy team is up against him.

Other guys that will make some fantasy noise this weekend are Moran, Murin, Heil, Leeth, and Perry. They are all wrestling at tournaments in which they will be favored in most matches. If you’re in need of a 141lb wrestler for your team this weekend, might I suggest a guy like Sa’Derian Perry? He’s a savvy senior that knows how to find big matches. Along with his great abilities, he is available right now in most leagues.

Although I am a UNC fan, I think this is the weight we see a #1 ranked wrestler fall this weekend. Absolutely no shade thrown at O’Connor, but after the weekend Brayton Lee had at the CKLV (beating Maruca, Zachrel, Thomsen, and Sasso) I am not betting against him. If you were on the Lee hype train before CKLV, god bless you. The field will be tough to make it through, but I believe he will make the finals opposite O’Connor. Do me a favor, take a look at your free agency portal right now. If by some miracle, he is on there, you might have just found the hidden gem you needed to take you to the fantasy promised land.

Another guy at Midlands to keep an eye on is Yahya Thomas. Yahya has beaten the likes of Brock Zachrel, Griffin Parriott, and Brent Moore this season. His only two losses have both come in one point decisions with Max Thomsen. If you want a guy that is going to have a chip on his shoulder this weekend, look no further than Yahya Thomas.

Another guy I’ve been super high on this season is Denton Spencer of Virginia. He is almost certainly a free agent in your league, but definitely shouldn’t be. The Sophomore is a pinning machine, with eight of his eleven wins coming by fall.

Lastly, one of the favorites to win the NCAA title this year is Brock Mauller. The Missouri product has yet to be tested this season, and won’t be this weekend wither. Make sure he is in your lineup.

Freakin’ Deakin man. In one of the performances of the year, Deakin took out the young Cyclone Star David Carr and NCAA finalist Hayden Hidlay. Talk about a good weekend in Vegas. He seems to have tightened all the possible holes in his game and looked excellent a couple of weekends ago at CKLV. He will walk through another historic tournament this weekend.

Most people know the name by now, but Kendall Coleman (or KC Stampede as the guys at Flowrestling call him) is a name we will be talking about for the next four years. He is 17-2 in his freshman campaign, with his only losses coming to Carr and Hidlay. Depending on seeding, I could see him making the finals opposite Deakin.

Another fantastic youngster is Anthony Artalona. Artalona made the round of twelve as a true freshman last year and is picking back up where he left off this season. Start him.

Midlands at 165lbs this weekend has a monkey wrench named David McFadden in it. I’ve heard through the grapevine that McFadden will be at Midlands since he missed out on going to the CKLV. The top three guys at the historic tournament are undoubtedly Marinelli, Wick (if he attends), and McFadden.

Wick just finished competing at US Senior Nationals last weekend where he took fourth place, beat the #1 seed Kulchytskyy, and qualified for the Olympic Trials. It is still up in the air whether or not he will come back to folkstyle right away at the Midlands or not, but we all know how the Marinelli/Wick matchups have gone. Regardless of a potential matchup with Marinelli, if he is there, Wick will score plenty of bonus points for you.

The presence of McFadden in the bracket adds an extra excitement for wrestling fans. The only time McFadden and Marinelli met it was a pin for McFadden. Again, no matter what happens in the matchup, if they meet, both will score plenty of fantasy points for your team. It will be a must-watch matchup if they do meet though.

Shane Jones of Old Dominion is having a pretty great start to his season, sitting at 11-4. He will be favored in all matchups at the South Beach Duals and is a great sleeper for your team this weekend.

Michael Kemerer has looked great technically and physically this year. His bulk up from 157 seems to have been the correct move for Kemdog, especially since he has been beating up every man placed in front of him this season. He has only had four matches, but his 100% bonus rate is still impressive at any level. Not only do I think he can hang with Mark Hall, I think he could be a sneaky Hodge candidate.

Another guy that has looked great this season is the undefeated Dylan Lydy of Purdue. He is 15-0 in his senior campaign and has beaten the likes of Steiert, Labriola, Valencia, and Mantanona. He will be the favorite to make the finals against Kemerer.

There are many great guys at the South Beach Duals at 174 this weekend, but a guy I would take a chance on is Jeremiah Kent from Missouri. He is 12-2 in his redshirt freshman season with a 64% bonus rate. With five falls and four technical falls, Kent is a dude to start  until proven otherwise. If you are in need of a 174 or floater this weekend, look no further than the Missouri Tiger Kent.

Taylor Lujan is about to throw several kitchen sinks at people this weekend at the Midlands Championships. In an interview with Flowrestling, he stated that his style was more calculated this year than his normal kitchen sink tactics in the past, which is even deadlier. It’s been a while since I’ve seen someone attack with such frequency and accuracy as Lujan does. He is a must watch and must start wrestler of the Midlands this weekend.

Another big name to watch at the Midlands this weekend is Nelson Brands. Brands was on a big streak entering the Hawkeye’s lineup and taking out then #5 ranked Sammy Colbray, but he had his freshman moment against Stefanik of Princeton. Stefanik is good, but Brands was viewed as the favorite before gets a little humble pie in the match. Look for him to rebound and cause some problems at the 57th Midlands Championship this weekend.

Ben Darmstadt will also be a hot commodity this weekend at the South Beach Duals. He has had a bit of an up and down season, but he should win all of his matchups and earn a few bonus wins in Fort Lauderdale this weekend.

Warner vs Brucki II is in the works this weekend in Illinois. They met a couple of weeks ago, with Warner edging Brucki with a last-second takedown. Assuming neither man slip up on their way to the Midlands finals, the matchup between the #2 and #3 guys in the nation at 197lbs will be another to watch.

A guy that could upset one of them is Thomas Lane of Cal Poly. Lane’s only loss on the season to this point was to #1 Kollin Moore of Ohio State. He is a difference-maker from the top position, turning many of his opponents. I put my money where my mouth was this weekend picking up and starting Lane on my fantasy team.

Lastly, a guy to keep an eye on this weekend is Jonathan Loew of Cornell. Loew is 13-4 with a 47% bonus rate in his true freshman season for the big red. Although he is currently unranked by Flo, he will be favored in almost all of his matchups. A potential matchup with #23 Koelling of Missouri could be the opportunity he needs to jump into the Flo rankings.

Gable is back. In his return for the Gophers last weekend, Steveson scored a 21-8 major decision. He put on a takedown clinic but ran out of time to get the technical fall. Even with guys like Jordan Wood at the South Beach Duals this weekend, Gable will smash.

At the Midlands, we will get to see freshman phenom Anthony Cassioppi tested. He will have a bracket loaded with ranked wrestlers. How many pins will he be able to pick up in his pursuit of the Hawkeye pin record (73)? Tune in live on Flowrestling Saturday to find out.

Want to hear more? Listen in to the Tech Fall Fantasy Wrestling podcast (available on all podcasting platforms) this week to hear Sam Herring and myself preview the 57th Ken Kraft Midlands Championship.