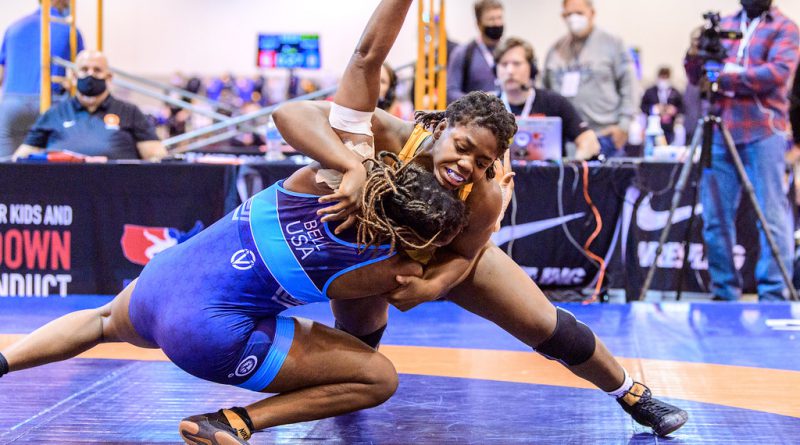 Across all the weights, many girls who competed in the Junior division also competed in the U23 division. These girls were still fired up, and more than ready to compete at the higher level! Let’s dive into a recap of the madness that took place last weekend in Omaha.

At 50 kg Emily Shilson dominated this weight yet again, only giving up two points all day. On the other side of the bracket, Samara Chavez racked up three pins and a tech fall to make the finals. Shilson vs. Chavez was a long-awaited match, but Shilson secured the tech proving what everyone already knew…she is the one to beat. Maria Vidales of Lion Wrestling Club and Aleeah Gould of King University were both contenders for a spot in the finals, but suffered pins en route. The two wrestled for third place and Vidales maintained her 4-0 lead to beat Gould for third place.

Similar to the 53 kg Junior division, the U23 bracket was stacked! Here again we have Tiare Ikei, Alisha Howk, Felicity Taylor, Alleida Martinez, and in addition to studs Cheyenne Sisenstein of King University and Ronna Heaton of Sunkist Kids Wrestling Club. All of these girls won the opening round by tech fall or pin advancing them to the quarters where the real action took place. First, we had Howk and Sisenstein; an extremely technical bout for both girls but Sisenstein held on with a 5-2 lead. Next, we had Taylor and Martinez, a 2018 Junior World Team Trials rematch where Martinez won two out of the three matches to earn her spot on the team. There was a fire burning in Taylor, who was up 4-0 before Martinez threw her for four, securing the 4-4 criteria lead. The second period had Taylor trailing until she shot in on Martinez to get a takedown and leg lace to take the lead and win the match. Ikei and Heaton both won their quarterfinal matches to wrestler each other in the semis. Sisenstein beat Taylor in the semis with a hard fought 8-1 decision and Heaton took Ikei to her back to get the pin and joined Sisenstein in the finals. A rematch between Ikei and Taylor occurred for third place, but Ikei, once again, came out on top. Heaton dominated the finals match with a 6-1 decision over Sisenstein. These girls are going to make some serious noise at the senior level!

King University’s Melanie Mendoza pulled an upset in the opening round against Augsburg’s Vayle Baker, pinning her in the second period to move on and wrestle Grace Pauls, earning another pin and a spot in the semis where she lost 4-1 fellow King teammate and winner of the bracket Allison Petix. Petix wrestled Marissa Gallegos in the finals winning 6-2. Baker and Mendoza faced one another again in the consolation semis, this time reversing the result and advancing to the third-place match by a 6-3 decision. The two seed Ngao Whitehorn lost 10-4 in the round of sixteen, falling into the consolation where she placed sixth after losing to Mendoza by fall. A bracket that has upsets on both sides must be a good one!

Surprise, surprise, Xochitl Mota-Pettis does it again! Pettis faced Abigail Nette of Sunkist Kids Wrestling Club and beat her by technical fall. Near the end of the first period, Pettis was put on the shot clock. Thirty seconds came and went with no score, awarding one point to Nette. But, a literal second after the shot clock ran out, Pettis scored a go-behind followed by a wicked series of trap arm gut wrenches to win her title. Third place winner, Alexia Ward knocked off teammate, and newly crowned national champ, Cameron Guerin in the quarterfinals. Gueri, who injury defaulted out of the tournament, did not place. Ward was outscored by Pettis in the semis and was bumped to the consolations where she faced Lauren Mason. Mason, who was also in the championship semifinals, couldn’t close the 7-2 gap. Mason lost to Ward in a neck-to-neck 3-2 match for third.

If you aren’t a fan of throws, go watch Koral Sugiyama vs. Gracie Figueroa; it definitely will change your mind. When I say my jaw dropped, I mean it hit the core of the Earth, just like Figueroa did when Sugiyama sent her flying! Figueroa fell into the consolation semis but forfeited out, defaulting her to sixth place.  If you claim that headlocks do not work at the highest level… you would be very mistaken. Seriously though, Sugiyama sent this girl’s feet up towards the sky. Unfortunately for her, she couldn’t play her game when she faced the seasoned Desiree Zavala in the finals who didn’t have a point scored on her the entire tournament. Sugiyama didn’t have a chance to throw as she was too busy being blasted through and leg laced. Another day, another stop sign for Desiree Zavala!

When you think of women’s wrestling you probably think of Adeline Gray, Helen Maroulis, Tricia Saunders, and Tamyra Mensah-Stock, but listen, Macey Kilty is continuously proving that she should be amongst those household names. Kilty, an athlete out of Tar Heel Wrestling Club, went 40-0 in points this past weekend. Her opponent in the finals, Ana Luciano, also teched her way to the finals beating both her teammate, Alyssa Aceval, and Wyoming Seminary Junior, Kendall Bostleman.

I want to talk about Amor Tuttle for a second. This Minnesota senior has been killing it at the high school level, and is now proving she can do the same at the college level too. Tuttle wrestled in the 59 kg bracket for Juniors and took eighth, but evidently made some huge jumps, placing higher two weight classes up. Will be her new weight? Either way, she really showed these college girls that she’ll be in the hunt next year! The finals of this bracket was between teammates Ashlyn Ortega and Victorya Torres of King University. Ortega picked up a tech fall at the end of the second period with a smooth arm drag to a nasty double leg, giving her both an 11-0 lead and a stop sign!

The second you tie-up with Skylar Grote it’s game over. Her physique compliments her style of wrestling so well. She’s a pure brute and never stops moving. Her training is paying off; she owned this round-robin of girls. Grote spent a total of forty-eight seconds on the mat before claiming her stop sign. What. A. Stud.

Kayla Marano, daughter of Kristie Davis (THE most decorated female wrestler in the United States and coach of Lion Wrestling Club), wrestled a dominant match against Augsburg’s Marlynne Deede in the semifinals outscoring her 10-3. Deede went on to place third after defeating Colorado Mesa’s Caylee Collins. Marano wrested teammate Ophelia Lara in the finals. In a strange twist, Kristie Davis stood in Lara’s corner and coached against her own daughter! Marano defeated Lara with an 11-0 technical fall to earn her title.

What an awesome bracket! Long time friends Dymond Guilford and Precious Bell faced off in the 76 kg division finals. Guilford was on top of her game that night! Bell and Guilford fired off their offense left and right. Early in the second period Bell went to ankle pick Guilford and got pancaked right to a pin securing the win for Guilford. Bell raised Guilford’s hand to show nothing but the utmost respect for her friend. After facing each other in the 76 kg Junior finals, Tristan Kelly and Yelena Makoyed wrestled again at U23’s not once, but twice! Once in the quarterfinals where Makoyed won 11-5, and again for fifth place where Kelly teched Makoyed 10-0. They are 2-1 at the college level right now. It will be interesting to see this new rivalry play out the next four years at the college level.