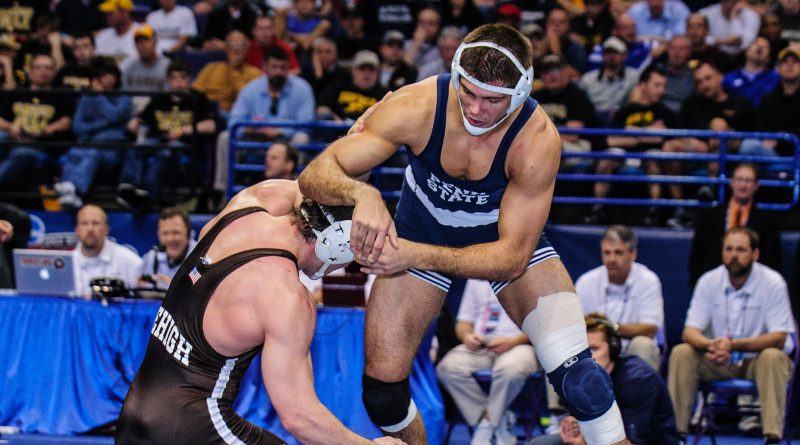 The #2 Penn State Nittany Lions took on the Scarlet Knights of Rutgers Sunday night at home in Rec Hall with Penn State coming away with a 38-6 victory. Rutgers had two victories out of the ten matches, winning the weights 125 and 157. PSU, however, was fairly dominant, walking away with bonus points in five of the bouts with three falls, a technical fall, and a medical forfeit.

The meet began at 125 pounds where PSU’s #25 Brandon Meredith took on #15 Nic Aguilar. The match went as predicted with Aguilar finishing the match with a 10-4 victory. Meredith scored the first takedown, but Aguilar countered by scoring the next three. Here’s an interesting note: Aguilar was the only Scarlet Knight to score any takedowns for Rutgers over the entire dual meet.

133 pounds was by far the most anticipated bout of the night. #11 freshman Sammy Alvarez vs. #4 Roman Bravo-Young was sure to be fireworks, and it did not disappoint. Alvarez is having a heck of a season, with wins over Mickey Phillipi, Cam Sykora, and Jordan Decatur. The match ended up going into quadruple overtime with RBY coming out on top with a literal last-second takedown. From absolute insane scrambles to incredible feats of athleticism and just some downright exciting wrestling from start to finish, RBY/Alvarez is a match that everybody should watch.

The match at 141 pounds was a much different tone, however. #2 Nick Lee dominated freshman Jo Jo Aragona with a 7-minute technical fall. Lee had a total of six takedowns against the highschool star Aragona, really demonstrating how far ahead Lee is. I’m looking forward to watching Lee compete against higher-ranked opponents in Murin of Iowa and Pletcher of Ohio State, both of which are upcoming matches for Nick Lee.

149 also went scratch with Jarod Verkleeren winning with a 7-3 decision over Nick Santos. Verkleeren had three takedowns to Santos’ zero, and added another win to his 12-2 record on the 2020 season.

157 resulted in another loss for the Nittany Lions with Mike Van Brill winning a hard-fought overtime victory over Bo Pipher. The largest question here though is the condition of Brady Berge, who still has yet to wrestle TWO MATCHES. Coach Cael Sanderson’s comments on Berge’s situation after the match were (in typical Cael fashion) vague, without really disclosing any information about his progression.

At 165 top-ranked Vincenzo Joseph scored a fall over Brett Donner in the third period.

174 pounds was interesting. #1 Mark Hall was struggling to score points over unranked Joe Grello, who fought hard for every second of the match. Unfortunately, the match ended early after Grello suffered a knee injury and was forced to forfeit to Hall. Best of luck and a speedy recovery to Grello.

A 184 Aaron Brooks won an extremely hard-fought victory by fall over Rutger’s Billy Janzer. The match was close until Brooks locked up a nearside cradle in the third period, ending the bout by pinfall.

197 had Shakur Rasheed winning a 6-0 decision over Jordan Pagano. Rasheed claimed during the post-match press conference that Pagano and he were friends, and Cael mentioned that they had been roommates previously. It’s always interesting to watch when friends wrestle, and the Rasheed/Pagano storyline was a cool thing to discover.

Lastly, at 285 pounds Seth Nevills was the victor with a first period fall over Rutgers Alex Esposito. The biggest takeaway from this match was Nevills’ scrambling ability! Very rarely do you see anything resembling scrambling at heavyweight wrestling, but Seth Nevills surprised the Rec Hall crowd with a classic far-ankle scramble, which ended up with Nevills coming out on top with a pin. It’s exciting to see Seth step up and fill Cassar’s spot in the lineup; hopefully, he can score points for PSU at NCAAs.

There you have it, a PSU/Rutgers recap from 1/19. The Nittany Lions will wrestle at home again on February 2nd against Maryland.