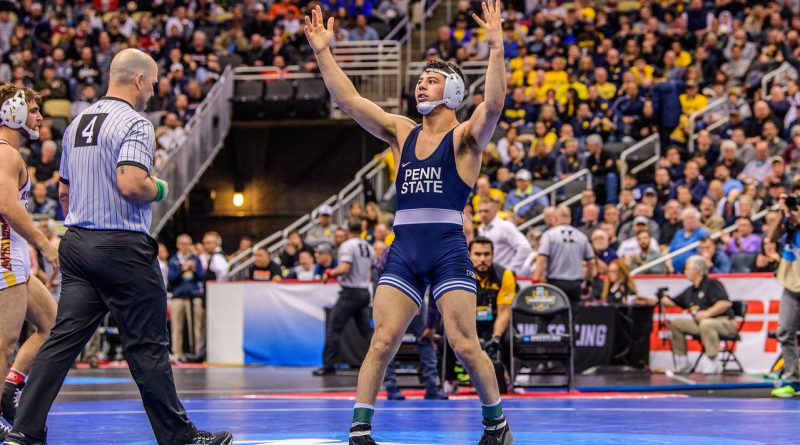 At last, the collegiate season is upon us. And with the beginning of the season, #1 ranked Penn State faced off against #35 Navy at Rec Hall, completely shutting them out in a 45-0 victory. Rec Hall was jam-packed with PSU and Navy fans alike, all eager to see where Cael Sanderson’s competitors would be after a full summer of growth. Today I will recap the match and provide for you some of my key impressions of the Nittany Lion’s first match of the 2019-2020 season.

Six of the ten matches wrestled yesterday were bonus-point victories: a major, a tech, and multiple pins. But, the remaining four matches were extremely close, three one-point victories and a single three-point decision. Brody Teske, Bo Pipher, Creighton Edsell, and Kyle Conel all wrestled very tight matches and, especially in Pipher’s case, won by the skin of their teeth. But, even though some fans would be disappointed in the tight margins of victory, I would like to remind them that it’s still the beginning of the season. Every one of those wrestlers will grow and become more offensive as the season progresses. That was Teske, Edsell, and Conel’s first match at Rec Hall, while Pipher has only wrestled a handful. Hopefully, by the next time we see them compete, their offense will be much improved!

3rd ranked Kyle Conel wrestled his first match under the lights at Rec Hall, and it’s clear to me that he looked a little tame compared to what was expected of him. Conel got to the legs easily enough but continually ended up in scrambles resulting in stalemates. Conel is clearly very strong, but in order to score more points, he’s gonna have to clean up his finishes. A solid blast double would serve him very well!

Come on guys, it’s been almost four years now. We know Cenzo can throw anybody. We’ve seen him do it to Isaiah Martinez for goodness’ sake! Tanner Skidgel apparently didn’t get the memo and Cenzo sent him flying.

As my partner Sam Herring noticed, all of the PSU starters steal signature moves. “Vincenzo brought the over collar offense that Nevills, Nolf, and Nickal started using fiercely.”-Sam Herring via Twitter.  In the final bout of the night #7 Roman Bravo-Young executed Jason Nolf’s patented Winn Dixie to scrape a major against Casey Cobb. Brody Teske utilized Mark Hall’s double collar ties, and Mark Hall secured the pin with Vincenzo’s double overhook throw. Penn State has a lot of fun out on the mat, and using each other’s moves makes it fun for the spectators as well!\

Penn State Wrestling fans are looking at March with high anticipation. From the talented wrestlers making the lineup such as Conel, Teske, and Gardner, to the highly ranked veterans with Lee, Joseph, Hall, and Cassar, Penn State is perfectly poised to take another NCAA championship. I’m excited to see the growth of all the wrestlers stepping on the mat for PSU and look forward to the end of the season!