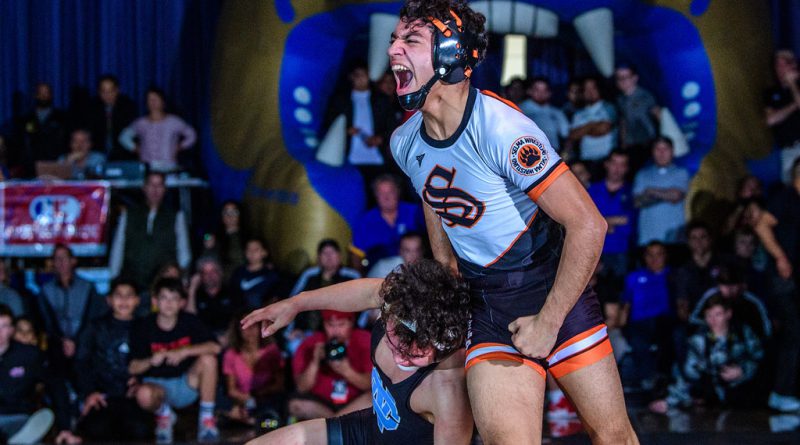 Editor’s note: I’m a photographer first-and-foremost, but the kids said I could write a piece about the Doc B, so long as I put something coherent together. Here are a few takeaways and observations from someone who spends 99% of his time taking and processing photos, and not deep diving into big boards and college commits. (Read: I’m usually the last to know anything, so go easy on the comments.)

The Doc B has been getting stronger year over year due to the hard work of Adam (and Steve) Tirapelli and the entire Clovis community. The timing of the event is perfect for teams to visit the sunny Central Valley (CA) during the holiday break. Gilroy has even tag-teamed a dual meet event (Garlic City Rumble) a few days before Doc B, giving teams like Delbarton (NJ), Lake Highland Prep (FL), Montini Catholic (IL), and Crescent Valley (OR) another chance to hit some tough California competition.

Just how good has the Doc B become? In the pantheon of current high school tournaments it is (arguably) the third best invitational tournament of the year, behind Walsh Ironman and Beast of the East. Measuring these events is hard, but when you line up the teams at each of those tournaments, there aren’t any others that I see that are tougher. There were 101 teams represented (!) here are the top twenty by placement:

Doc Buchanan, the namesake of the tournament, always wore a cowboy hat and had a doctorate in education, bringing big-time HS sports programs to the Clovis Unified School district, which includes Buchanan High, Clovis High, Clovis East High, Clovis North High, and Clovis West High. Each of those schools has a solid (or better) wrestling program, but throw in Selma just down the road, and Lemoore about 40 minutes south, and you are talking a hotbed of wrestling! [big eyes emoji] That’s a LOT of talent in a pretty small square mile radius! If you’re a high school team and you plan to travel to that caliber of a region, you need to bring your studs, and that’s what’s happening with the Doc B. Schools from around the country want to be the best, so they are choosing to hit hard at the midpoint of the season, especially after some of the gridiron guys have had a month of practice. Another metric of the caliber of this tournament for me: A TON of D1 coaches were in attendance either recruiting or checking in on their recruits to let them know they are loved.

It doesn’t hurt that the tournament is run extremely well, and the fan base is rabid over wrestling, which is a delight when any slick/big move happens and the gym erupts. AND champions each get a cowboy hat in honor of Doc Buchanan!

Has Anyone Ever Heard of Dominick Serrano?
I typically have to work on the Friday of Doc B, so my usual routine is to show up early Saturday morning for the semifinals. This year I made it down by midday Friday and walked in just as the round of 16 was starting. I geared up and got onto the mats to start shooting. Normally I do a bit of homework before I head to a big tournament, but this year I slacked on that (okay, I was processing senior nationals photos), so didn’t quite have as much knowledge of who to shoot outside of the CA kids. Compounding that, there are six mats in one gym, and three more in another gym, making those first few rounds a chaos sandwich.  (Side note: I did just find this excellent preview that I wish I had seen on Thursday! http://www.thetakedown.media/2020-doc-b-the-preview/).

About three matches in on mat 1, a coach taps me on the shoulder and says, “you want to watch this kid—should be fireworks.” Skeptical, because I hear that all the time, I was like, “Oh, okay coach.” [eye-roll emoji] Dominick Serrano (Windsor (CO)) is a firecracker, inside a bottle rocket, attached to a roman candle. A veritable 4th of July turducken. Strong, explosive, great pick; and he’s a really nice kid to boot. He might still be wearing his Gable-wrap for all we know. As I said earlier, I may be the last to know about Dominick, but 1) I now have the best pictures of him, and 2) now I know what all the hype is about.

Is Cael Valencia More Like Zahid Or Anthony?
I know who Paddy Gallagher is and I know who Cael Valencia is, so no, I don’t live in a pinecone full-time. Like most of the country I picked Paddy to take 145lbs last weekend, but what we saw out of Cael Valencia, whether it was channeling his brother Zahid’s slickness, or Anthony’s grit (adding in his own flair of mat return after mat return, after mat return), this kid is woke and dangerous! He had an answer for every Gallagher attack, controlled from the top, and finished when he needed to. Tip of the (cowboy) hat to Ruben Valencia and the team at Saint John’s Bosco for churning out champions year after year.

Luka Wick (San Marino*) Is Perfecting His Cradle And We Should All Be Afraid
Speaking of learning from your brothers, Luka Wick has an Evan Wick cradle going and that’s frightening, because a junior in high school with the build he has will be outlawed in the next few years. He’s going to have to register his cradle with the state authorities as a concealed weapon. Dominant showing from this kid.
* The high school, not the Olympic powerhouse country. [wink emoji]

You know that scene in Saving Private Ryan where the German slowly plunges the knife into Pvt. Stanley Mellish’s heart? That’s what this cradle was like. “Shhhhh…it will all be over soon.”

Chase Saldate (Gilroy) Is Good At Wrestling
Period. And thanks for hitting this double right towards me!

Isaiah Salazar (Windsor (CO)) Is Good At Wrestling
Perhaps the best match of the finals that wasn’t named Richie Figs and Joey Cruz was Salazar vs Nathan Hass (St John Bosco). 9-8 TB2! High-caliber wrestling is what happens when you get respective state champs in a finals match with a fully attuned audience. Great match, superb action from the (Flo) ranked #5 and #6 guys in the country. Haas is going to Nebraska (along with Serrano) and Salazar is headed to Minnesota, so the Big 10 is scoring a couple of studs (along with Patrick Kennedy) at light heavyweight. Worth the replay on Flo.

Dylan Ragusin Is Mentally In College Already
Michigan recruit Dylan Ragusin (Montini) might just have his college bags packed already, he’s wrestling like he’s been in the room with Sean Bormet and Josh Churella for a few months already. 126 is always stacked nationally, and so a seventh place ranking (at the moment) belies the tenacity of this kid. Great things to come for sure.

Richie Figs Vs Joey Cruz Was Lit!
Back to the fact that Figs and Cruz live probably 10 miles apart, and they are ranked #1 and #2 respectively in the nation, this match is a must watch over and over (and over). Great action, thrilling ending with Figs almost hitting the assassin (he probably would have hit that on anyone other than Cruz) and holding on for the 3-2 win. The match had everything you could ask for as a wrestling fan.

Gavin Kane at 170!
Georgia was in the house! Great pick-up for North Carolina.

Bakersfield Big Men
Bakersfield has had talented kids for years, at all weights, but this year their two studs are are 220 and 285 in Justin Darter and Josiah Hill. I just saw that Hill is headed to Little Rock, which is awesome. Sam Herring, remember that name.

Delbarton, Bergen Catholic, Lake Highland Prep, Montini Catholic, Windsor, Pomona, Oak Park River Forest, Roseburg…
What a treat to be able to watch and photograph these powerhouse wrestling programs. California appreciates the time and commitment to come out to hostile territory and put on a fantastic show. The only criticism I have is for Delbarton to work with their heavy weights to NOT jump into their coaches arms after a huge semifinal win. That rarely ends well. [Laugh emoji]

Check out the entirety of Doc B on FloArena.