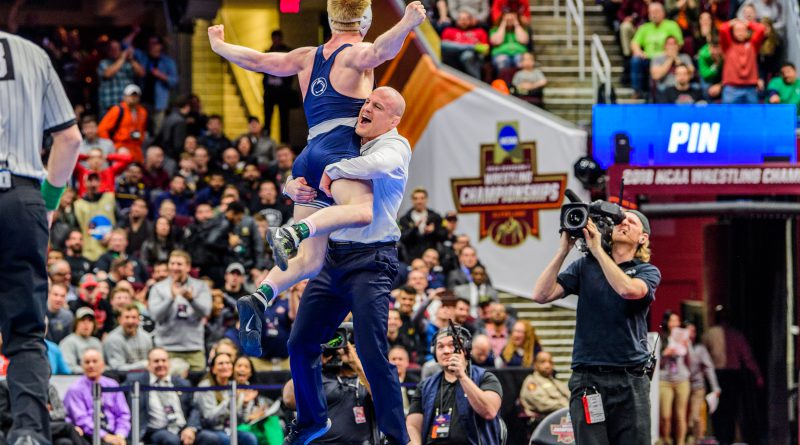 In a world starved for sports, the HMA team decided to put together a dual tournament containing the 16 most accomplished teams from 2010-2020. Not only are we talking about the best teams of the decade, but also each team’s all-decade lineup. The idea was just to have some fun talking about hypothetical matchups between some of the best wrestlers of the decade, but it blossomed into a whole different animal…

How we got the top 16 teams

To figure out who the top 16 teams of the decade were I went through each NCAA wrestling tournament from 2010 to 2020 and recorded “Top 10” NCAA placements. After compiling the list of 23 schools that earned a team placement in the top ten, I ordered my list from most to least placements and grouped schools by the number of placements they had in the ten year period. This left me with a group of three teams that had placed in the top 10 of the NCAA tournament all 10 years (Penn State, Iowa, Cornell), a group of two teams that had placed top ten 9 times (Ohio State and Oklahoma State), and so on.  I then looked at the average place earned for teams in their respective groups (obviously the lower the better). This left me with a clear list of 16 teams.

For the first dual of the series, the HMA gang (Sam, Jude, and Jacob) was joined by HMA editor and former two-time All-American for Lehigh, Mason Beckman. As we went through the dual, we tried our best to give every guy a fair shake; however, Penn State has been one of the best dynasties in sports history over the past decade. Apologies to our Lehigh team, you all were great in your respective careers, but Penn State was just that good this decade.

Joined by Flowrestling godfather, Christian Pyles, the crew breaks down one of the best duals of the round. Complete pandemonium breaks out at the 165-pound bout when Jude decided to use the first landmine of the series to take out an American hero, Jordan Burroughs. Jude takes us through a scenario that is similar to Mekhi’s finals match with Vincenzo Joseph. According to Jude, Mehki locks up the same cradle as he did on Cenzo on Burroughs and shocks the crowd. The landmines weren’t done there though. At the 197 pound bout, CP uses his landmine to propel the horse-man, Jared Haught, over Craig Brester via fall as well. When the dust settles, the Hokies take the dual on the backs of Lewis and Haught.

The second episode of the All-Decade Duals starts off with Jacob, Jude, and Sam navigating a relatively simple Iowa vs Arizona State dual. Arizona State is able to escape the Hawkeyes with two wins but lose in the dual’s monster matchup. Lee vs Robles is a debate that has traveled the college wrestling universe and even made an appearance on Flowrestling. After much discussion and detailed scenarios, Lee takes the bout via a 2-1 vote.

After the Hawkeyes rout the Sundevils, Flowrestling’s Mark Bader joins the show to aid his Mizzou Tigers. Michigan opts to start the dual with their two-time national champion at 141 pounds; however, this decision ends up backfiring on them when Bader uses his landmine to bust the dual wide open in the first match. Bader visualized funky-man Jaydin Eierman locking up a signature cradle to down the Wolverine legend in the opening match. The fans are stunned, but not for the last time. As the dual comes down to the final two bouts with the Tigers leading 15-12, Conor Youtsey (the original Mr. March) gets the Michigan fans on their feet with a fall over fellow All-American Alan Waters. With one match to go and their national finalist, Stevan Micic, on the, line Michigan feels confident it will pull the upset. John Erneste has other plans. In a wild match, Erneste uses his veteran savvy to put Micic on his back and gain multiple sets of nearfall. Erneste ends up barely holding on to the major decision to shock the Michigan crowd and win the dual for Mizzou 19-18.

Episode #3 starts off with the team welcoming Flowrestling’s David Bray on the show. D***, he is rocking a great quarantine beard. The first hot take of the dual is Pletcher vs Brewer. There are so many things the crew is deciding between, but, in the end, Pletcher earns the “W” over national champ Brewer off of stylistic clash. While the stats leaned in Brewer’s favor, the majority decided that peak Pletcher would edge out peak Brewer. In the first (and only) landmine of the dual, Bray breaks Mymar’s heart yet again. Martin just coped with his loss to Dean in the national semi-finals in 2019, only to have Bray throw him back into another Rutt (see what I did there). Although the Sooners kept it closer than many would think, the Buckeyes were just a little too much for them in the end. 18-15 Bucks.

Moments after Bray’s departure, 2020 All-American, Brayton Lee, joins HMAF to support his Gophers. Brayton is given choice and starts the dual at 165 to set up the best match in the main event slot. The Gophers rattle off 5 straight wins over the Illini to jump out to a 15-0 lead. Jacob and Sam bring the dual to a screeching halt at 285 pounds when they proceed to argue about Minnesota’s rep at the weight. Sam is of the opinion that Gable Steveson should be listed due to his obvious talent and promise for the Gophers, but Jacob chose to take a more objective path and use the two-time national champ, Nelson (obvious choice Sam). Things start getting fun at 125 pounds where “The Backpack”, Ethan Lizak, toes the line with two-timer, Jesse Delgado. This is a great match, but Delgado’s ability to scramble out of impossible situations earns him the victory. The final bout of the night doesn’t disappoint. Dylan Ness gets his revenge over Isaiah Martinez when Brayton uses his landmine to gator-bacon Imar. One of the most exciting wrestlers in Minnesota history takes out the Illinois legend by fall.

In the final episode of the round of 16, NCAA champ Seth Gross jumps on the call. He chooses to start the dual at 149, which might confuse some, but he has a plan. The dual goes pretty much as expected until the guys leave Jacob on an island, forced to decide the 184-pound match between Boyd and Rutt (man, this Rutt dude is everywhere). Jacob struggles with the decision while having the pressure put on him by Seth, but eventually chooses Boyd. In the end, Boyd did lose the head-to-head to Rutt, but also had wins over multiple national champions and earned more All-American honors than Rutt. As the dual rolls around to the back half, we come to the 133-pound super-match, Gross vs Fix. Gross gives us his perspective on the match and makes some great points. He ends up winning the popular vote on the show, even though Twitter disagreed. Finally, we see Seth’s plan unfold in the final bout of the night that sees Tristan Moran lock up one of his funky cradles (AKA “landmine”) and sticks two-timer, Dean Heil. Cowboy fans are in disbelief as the Badgers party in Stillwater. The first upset is complete as the Wisconsin Badgers down the Oklahoma State Cowboys 18-15. Wow.

In the final dual of the opening round, All-American for the Fighting Scots, Sean Russell, joins the show. Jacob uncovers an absolute beast of a bracket that 165-pounder, Jarrod King, won in 2009. King won one of the toughest brackets in NCAA history from the #12 seed, incredible (check it out here). Everything pretty much goes as planned for the Big Red until multiple-time All-American, A.J. Schopp, takes out national champion Nahshon Garrett. According to Sean, he sees Schopp being more likely to turn Nahshon than Nahshon taking down Schopp multiple times. Jacob hysterically disagrees but is out-voted. Just when we thought Yianni would get the dual back on track for Cornell, he steps on a landmine as he is turned multiple times and majored in surprising fashion by two-time finalist (and possibly one of the best to never win a title), Mitchell Port. Poor Yianni, but at least he can still win four titles. The dual winds down with a Habat win over fellow All-American, Villalonga. Edinboro gets a little too close for comfort, but Cornell moves on to the quarterfinal round 18-13.