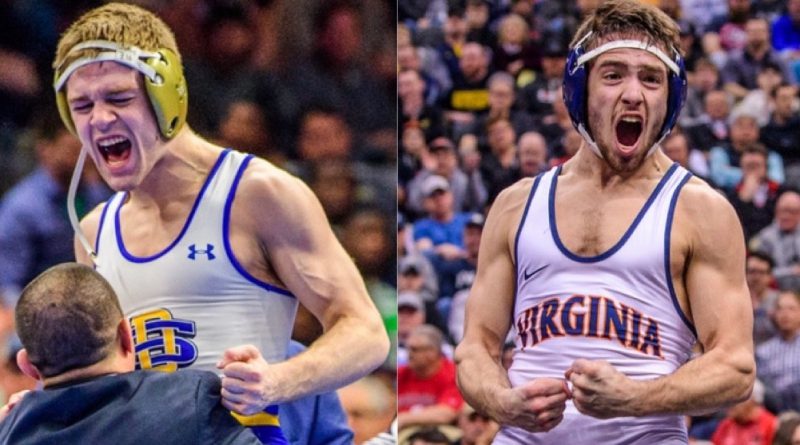 The rapidly expanding wrestling media organization, Home Mat Advantage, has been blessed with plenty of recent success. The podcast started by Sam Herring and Jude Swisher has officially been up and running for over a year and has built on its origin with an impressive website, a growing presence on multiple social media platforms, dozens of interviews with today’s wrestling icons (including Jordan Burroughs, Kyle Snyder, David Taylor, etc.), and adding several unpaid employees to fill the different niches that wrestling fans crave.

A byproduct of the growing success of HMA earned co-founders Herring and Swisher the prestigious “Journalists of the Year” award in WIN Magazine. WIN Magazine is most well-known for giving the Hodge Trophy yearly to the nation’s most dominant wrestler. So, in a way, you could say that Herring and Swisher won the “Hodge of Journalism”.

Today HMA is proud to announce that NCAA Finalist from the University of Virginia, Jack Mueller, and NCAA Champion from South Dakota State, Seth Gross, have accepted positions at HMA as co-hosts of the HMA Fantasy Podcast. Jack and Seth have both appeared recently in HMA’s All-Decade Duals on the HMA Fantasy Podcast and have built close relationships with the HMA team.

Jack Mueller wrestled his collegiate career for the Virginia Cavaliers where he was a 3x NCAA All-American and a 2019 NCAA Finalist. Prior to college, Jack was a 4x Prep State Champion and a 4x Prep National Champion. He also won a Cadet National title and two Junior National Titles, all in Freestyle. He finished his high school career in Pennsylvania wrestling for powerhouse Wyoming Seminary ranked No. 3 at 126 pounds and No. 13 pound-for-pound by Flowrestling.

Looking back at Jack’s college career, one of the biggest highlights has to be defeating Sebastian Rivera 8-2 in the NCAA semi-finals while posting an impressive five and a half minutes of riding time. Jack’s impressive college career ended with a final record of 85-14 and a career bonus rate of roughly 57%.

Seth Gross wrestled most of his collegiate career for the South Dakota State Jackrabbits before transferring to the University of Wisconsin for his season campaign. In his college career, Seth was a 2018 NCAA Champion, 2017 NCAA Finalist, and altogether a 3x NCAA All-American. Prior to college, Seth was a 3x Minnesota State Champion at wrestling powerhouse Apple Valley. He also won three freestyle national titles, two Cadet and one Junior. He completed his historic high school career with a record of 153-15.

A highlight of Seth’s career would be winning SDSU’s first-ever individual NCAA wrestling title. He did so by defeating Michigan’s Stevan Micic 13-8 in the national finals. At the end of Seth’s collegiate wrestling career, he stood with a career record of 129-23 and a bonus rate of roughly 63%.

The Move to HMA

There is no doubt that Jack and Seth had tremendous college wrestling careers and will continue to have success in their endeavors on the Senior Level. However, with all of their success and continued dedication to making World and Olympic teams in the future, why did they choose to join HMA?

When both were asked that same question, Jack responded by saying, “Because I love the sport of wrestling and want to share my knowledge of it. Wrestling is a community and I want to play a bigger role in it by being a part of HMA.” Seth had something similar to say, “I joined because I think it’s a cool opportunity to talk wrestling with a knowledgeable group of guys and grow the sport of wrestling.” It is clear that both Jack and Seth have a deep passion for the sport and a desire to not only be the best, but also help grow wrestling and help the younger generation of wrestlers coming through the pipe.

Jack and Seth will be joining Senior Fantasy Analyst, Jacob Hewgley, to host the HMA Fantasy Podcast that will air weekly on all major podcasting platforms. Future projects for HMAF include: The Best to Never Win an NCAA Title, Which Year of NCAA Champions Was the Best, How Many Weights Should There Be in High School Wrestling, and much more.